You are at:Home»Park Briefs»Hubbell Warns Against Use of Its Deadends, Clamps, and Bands
By Rick Kahl on April 8, 2021 Park Briefs

Hubbell Power Systems has issued a safety advisory, stating that its deadends, suspension 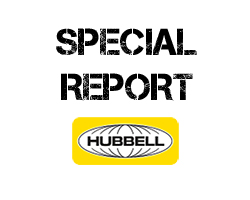 clamps, and pole bands must not be used in ropes/challenge course applications. This has caused a flurry of discussion and some uncertainty within the ropes course and zip line industry, as these products have been widely used in the industry, some for 20 years or more. The notice has led some builders to begin replacing the named products, and others to consider their next steps.

The notice states, in part, “Hubbell Power Systems, Inc. (“HPS”) has learned that businesses serving and in the ropes/challenge course, aerial adventure park, canopy tour, and zip line industry (collectively, the “ropes/challenge course industry”) are using HPS Deadends, Suspension Clamps and Pole Bands in their designs and courses. We are specifically advised that members of the Association for Challenge Course Technology, members of the Professional Ropes Course Association, and other industry participants are using these HPS products in applications for which they were not designed or intended.”

The notice describes the products and presents photo examples of the products so that operators can identify the affected components.

It further states, “Hubbell deadends, suspension clamps and pole bands, branded as Hubbell/HPS, Fargo, Chance or Anderson products, are not designed or tested for use in rope/challenge course, aerial adventure, canopy tour, and zip line applications.

If these components are used in such applications, they may be subjected to forces and stresses for which they are not designed and fail, resulting in serious personal injury or death.

Hubbell/Fargo/Chance/Anderson deadends, suspension clamps and pole bands should not be used in such applications and any existing usage should be immediately discontinued.”

PRCA principals have started sending the advisory out to all associations and state regulators who are involved in challenge course industry, a move that could put more teeth into the document. Ropes course inspectors will have to decide whether use of the Hubbell components will require them to fail an inspection or not. Given the liability issues involved with unauthorized components, inspectors may well lean against certifying courses that use them.

Long History of Use

The use of Hubbell deadends in ropes/challenge courses, and the similar StrandVise manufactured by MacLean Power Systems, has a long history. MacLean had recommended against use of the devices in 2007, at which time ACCT recommended that these deadends be used only with appropriate backup systems. This advice was based, ACCT has said, on a letter from MacLean.

Two technical bulletins posted on the ACCT website (acctinfo.org) describe the situation and solution, and have defined the association’s position on the use of such devices. ACCT eventually incorporated this solution into the ACCT standards.

However, Hubbell’s advisory advises against that use. It states that its products “are designed, tested, and specified solely for use in the power and utility industries. They are not intended for other uses and have not been tested or evaluated for use in ropes/challenge course applications or as components of life safety applications; even with backup.”

Just what this means for the ropes/challenge course industry is not yet clear. It’s likely that many Hubbell deadends are still in use. There have been very few instances of failure of any deadends in ropes courses, Hubbell-branded or otherwise, and no evidence of failures for a decade or longer.

Since the advisory is not based on any signs of imminent failure, it’s possible that some builders will warrant the continued use of the products, though the utility of any such warranties is uncertain. Some builders have already begun to replace the impacted components. Operators and builders are advised to check with their attorneys and insurers for guidance.

Further, Hubbell’s March 17 advisory was not sent to ACCT; it went only to the Professional Ropes Course Association, whose members had asked Hubbell to clarify use of the deadends after inspectors came across them in their work. The inspectors questioned whether this use was approved by the manufacturer, a standard practice for inspectors. Hubbell declared this was not approved, and posted an advisory to its website.

Subsequently, PRCA inquired about other Hubbell components, including suspension clamps and pole bands, that its inspectors had encountered during their work. Hubbell sent a revised advisory to PRCA that added these components to the list of disapproved products. As of the morning of April 8, ACCT had not received the advisory. Read the PRCA notice here.

ACCT executive director Shawn Tierney had a brief conversation with Hubbell on April 6, according to a statement delivered to Adventure Park Insider, in which he requested clarification of the official position of Hubbell regarding scope of equipment included in the notice. He also asked that ACCT receive the notice so that it can forward information to its members.

ACCT said it intends to publish a statement to owners, vendors, and inspectors later today, addressing specific suggestions for the industry’s response to the published notice from Hubbell Power Systems. Update: ACCT has published a statement as of 4pm Eastern 4/8/21. It can be viewed here.

Update: ACCT has published guidance on the Hubbell advisory. It can be found here.

For its part, PRCA and its ANSI/PRCA standard have disapproved use of the Hubbell components and similar products going back to 2007, based on the MacLean advisory.