Buffalo RiverWorks, located on the banks of the Buffalo River in Buffalo, N.Y., has added two covered high ropes courses to its list of offerings. 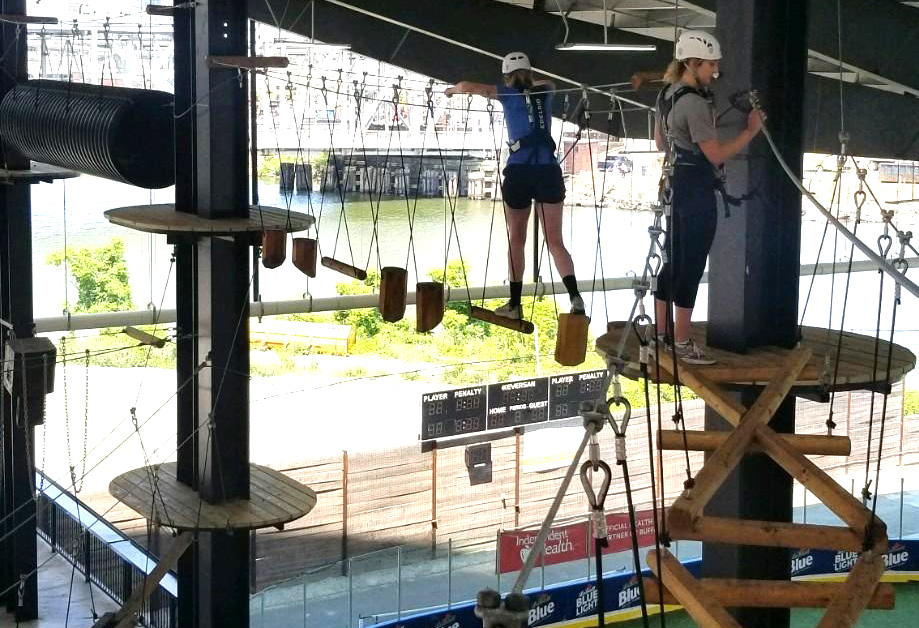 Matt Prime, director of recreation for Buffalo RiverWorks and part of the team who created the new courses, said, “We were in a meeting with ownership discussing the possibilities of adding a ninja warrior-style course which took participants up in the air. I mentioned to the owner that it sounded more like a ropes course than a ninja course, and a couple of pictures later the idea was set and planning started.”

The courses are suspended under a pavilion-style roof above the complex’s ice rink. The open-air style of the roof allows guests to feel like they’re outdoors, while still allowing for operations during inclement weather. Each course features ten unique elements, providing a challenge to participants age 7 and up. Participants move through the course utilizing the Kanopeo Speedrunner continuous belay system. [Read more about belay systems “Living On A Lifeline”]

“We came up with the idea in February and wanted it open by Memorial Day,” said Prime. This limited time frame made for a challenge in realizing the project. Prime’s team enlisted Treetop Trekking USA to execute the concept, design, and installation. “We put a hard deadline in and Treetop Trekking made it happen. From conception to opening was just under four months.”

Buffalo RiverWorks, as a facility, has surpassed the Buffalo Bills NFL team for number of visitors per year and hopes to entice 10,000-15,000 of them give the ropes course a try.