If there is such a thing as essential entertainment at an adventure park, the zip line might well be the first activity to qualify. The zip line has become as much a part of the typical adventure park (or mountain resort) as home plate is on a baseball diamond.
Zip lines of various sorts have been around for centuries, both for human transportation and as a means for moving goods—food, mined ore, etc. But as an adventure ride, the zip line is relatively new, roughly 20 years old. And business is booming: according to one estimate, there are now somewhere in the neighborhood of 20,000 zip-line rides in the world, many of which are producing a handsome chunk of revenue for their proprietors.

So if you are an adventure park operator, a zip line (or zip tour) is a must-have part of your activities package. However, “zip line” is a multifarious concept, which is to say, no two zip lines are the same. A single zip line might range from less than 100 feet long to more than a mile-and-a-half long. It might drop more than 2,000 vertical feet, and it might at times be steeper than a 50-percent grade. It might be in a natural environment or an urban amusement park setting. It might be a “tour,” with several separate segments. It might comprise a single line or as many as six parallel lines.

Given the many design variables, what works best? How do you decide what type of zip line will work in a specific location? 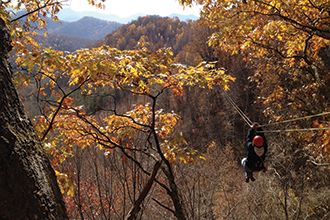 Leslie Sohl of Bonsai Design recommends an initial assessment of “guest population stats.” That is, who will be riding the zip line, and what experience are they looking for? While this might at first seem like a demographic calculation, it is in fact more a calculation of time and money. How much time do guests have to spend—less than a half hour for a single ride, or a few hours for an extended tour? And how much money are they willing to spend, with prices ranging from $10 to more than $100 per rider?

Before going into the time and money aspects, however, it is worth considering the demographic component. There is really no demographic segment that can be excluded; five-year-olds to 70-plussers can be part of the mix. Bonsai Design even has a zip-line ride especially for infants, according to Sohl. 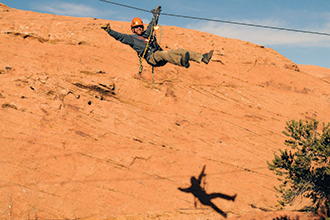 In fact, while zip lines might at first seem to be made for adrenaline-junkies, Valdo Lallemand, president of Aerial Designs, says zip lines “are not a challenging activity, because they are so controlled.” When it comes to an adrenaline rush, says Lallemand, zips just aren’t in the same league as, say, bungee jumping or skydiving.

To put that into context, even on a long and steep zip line, where speeds exceeding 60 miles per hour might be possible, the risk is infinitesimal. Serious zip-line accidents are extremely rare, and the various braking systems—rider-operated, guide-operated, or automatic—are extremely reliable.

Eric Cylvick, member manager of ZipRider, says there should be no problem putting an older, less nimble rider on a line that can reach highway speeds. In fact, it can also be a great activity for disabled guests, since ambulatory capability is not a requisite. No athletic talent is necessary; all you have to do is sit down and enjoy the ride.

Some rides allow for hand braking by the guest, but that is mostly to provide what Sohl calls “a sense of participation.” For the most part, control and safety remain under the auspices of ride operators, through automatic gravity brakes or guide-operated brakes.

Zip-line hardware hasn’t changed enormously in the last decade or so. Says Cylvick: “A lot of the technology is similar to what it was five years ago. It has been a matter of refining.” But two technological improvements have been instrumental in enabling design improvements. First are the cables themselves; so-called swaged cables, says Lallemand, make for a “smoother, softer, quieter ride” and are more durable than their predecessors. Second, braking technology, for which ZipRider has been a principal innovator, enables designs that incorporate steep pitches and assure reliability at high speed.

Hence, the initial presumption—that longer, steeper, faster rides are for younger adrenaline seekers and shorter gentler rides are more appropriate for families and older riders—might be false. Anything goes, really, for any demographic segment.

WORK WITH WHAT YOU HAVE

So why would an adventure park or resort operator choose a single, short ride or a longer, extended tour? A big part of that determination is dictated by the specific environment in play—more on that in a moment. But Lallemand says that remoteness is a central determining factor as well.

Few people, he says, are going to want to drive several hours for a single ride of a few minutes. So, more elaborate zip-tour designs make sense at locations that are more remote. And destination visitors are typically more willing than day trippers to pay $80 to $100 for a couple of hours of outdoor entertainment. On the other hand, highly accessible locations near large visitor populations call for a short, relatively inexpensive ride to maximize throughput and revenue. At a park with the potential of hosting 2,000 riders a day, having a short ride makes more sense than settling for the much smaller capacity of a long zip tour.

Ultimately, however, you can only play with the hand you are dealt environmentally. An urban-area park operator simply doesn’t have the terrain to build anything comparable to, say, the 8,350-foot line—reportedly the world’s longest—installed by ZipRider at Copper Canyon in Chihuahua, Mexico. In addition, a central purpose of zip lines, like canopy tours, is to give guests a unique chance to appreciate beautiful natural environments. Thus, cutting a wide swath through trees or dynamiting rock to make room for a zip line probably doesn’t make sense. “The structure itself is not as important [for the guest experience]as the overall takeaway,” says Sohl.

From an environmental perspective, the two critical design factors that come into play are natural features to enhance the ride experience, and engineering considerations that determine where an installation is feasible. As an example of the first factor, Lallemand was recently in Hawaii with a new client, who had a choice of site possibilities to consider. During Lallemand’s location inspection, he noticed a particularly beautiful waterfall, which he felt needed to be a part of the zip-line setting. Simple lesson: make the most of your natural assets.

When it comes to engineering, zip rides are almost always a continuous, uninterrupted line (or several, in a multi-stage zip tour). The main engineering focus is on start and finish stations, whether on natural or man-made features.

According to Jared Krupka, principal engineer for K2 Engineering, all installations should meet ACCT standards; for example, anchoring wires need to be able to bear two times the expected load. Krupka says that ASTM standards, those of the American Society of Civil Engineers, and international building codes should also be followed. Different jurisdictions—states, federal land, municipalities—have different permitting and inspection standards as well, although enforcement is often lax. “A lot of states adopt ASTM standards,” says Krupka, “but they don’t enforce them.”

Anchoring is perhaps the most important component of station siting, ideally where anchoring wires can be extended at a 45-degree angle. Krupka says that 60- to 70-degree anchoring is possible, but that 45 degrees “maximizes horizontal and vertical” forces. In other words, a relatively flat setting where guy wires can be extended at 45 degrees is optimal.

The number of lines in an installation is another consideration. While zip tours typically feature a single line for each tour segment, one-shot zip rides usually include two to six parallel lines. Multiple lines provide a “shared experience” for guests, as Cylvick puts it—flying through the air on a zip line might be a gas, but having your spouse, best friend, or grandmother next to you can make it a real hoot. Krupka suggests that a smart approach to an initial zip ride construction might be to start with two lines but leave room for the installation of two more future lines if business warrants it.

An additional factor to consider in a multi-stage zip tour is the sequencing of segments. Optimally, you want to “build up the excitement,” says Lallemand. He points as an example to a four-stage Aerial Designs installation in Arizona, which starts with a 65-foot line to give riders “confidence that it will work,” and finishes with a 2,300-foot line and a top speed of 45 miles an hour.
The number of segments in a tour obviously depends on the terrain and setting, but Lallemand calls seven “the magic number.” In part, that is determined by finding a satisfying compromise on the price/time grid. While guests might be willing to pay $100 for a two-hour tour, resistance is likely to arise for a three-hour tour at $150.

PRICING OUT THE OPTIONS 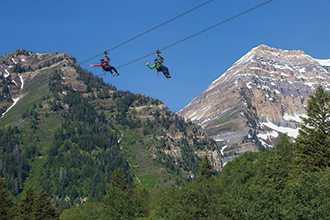 Not the least among design considerations, of course, is cost. Cylvick says that the cost of an installation by ZipRider, which specializes in longer, steeper rides, can range from $800,000 to $3.5 million. But less ambitious installations can be had for less.

And the installation itself is only a part of what is being paid for. According to Sohl, the complete process, from the initial consultation with a client to opening day, involves acquiring permits, construction, inspection, testing, and staff training. That might take anywhere from a couple of months to a year (delays in permitting and inspection often slow down the process), and it doesn’t necessarily end there: beyond the initial installation and inspections, Bonsai includes the cost of annual inspections. (See “Find the Right Builder,” page 38, for more details about planning and cost considerations.)

Tag onto those costs the operational expenses necessary once the ride is up and running. Staffing expenses for multi-stage zip tours, where guides are necessary, are typically higher than for single rides. On the plus side, maintenance is usually minimal; lines, stations, and hardware (harnesses, trolleys, brakes, etc.) are all pretty durable.

The return on investment? Anywhere from less than a year to five years is the time frame suggested by design companies. That depends largely, of course, on the annual number of paying guests, which can range widely. Lallemand says that a remote, destination-resort client might be happy to host 4,000 guests in a season, while a more urban client might expect 20,000 riders a year.

In the end, there are as many possibilities for zip-line designs as there are zip lines—no two are alike. But any park or resort operator contemplating a zip-line installation should start by considering three principal factors: budget, setting, and guest profile, of which the second is most important.

Regarding the budget, few operators can swing an installation of more than $3 million. But anyone should be able to get in the game for $500,000 and up.

Even though pretty much any zip ride can be handled by any rider, the demographic profile of your anticipated guests is a major factor to consider. If families are the primary audience, a ride that engenders at least the perception of intimidation might be something to avoid. More important than demographics, though, are sheer numbers and how much customers are willing to pay, i.e., tens of thousands of riders paying $15 apiece for a single zip, or a few thousand riders paying $100 apiece for a tour.

Ultimately, the overall guest experience will be determined by what assets—terrain, views, natural and man-made features—can be incorporated within the reasonable constraints of budget and engineering feasibility. (For more on the importance of location, see “A Sense of Place,” page 46.) While zip lines can produce thrills for participants, the experience of appreciating a beautiful or unusual environment from an unusual perspective is the real draw. For most participants, that becomes the essence of the ride.