Travelers love pictures of themselves doing once-in-a-lifetime activities surrounded by stunning natural landscapes. This cultural trend is a win-win for business: when photo system technologies are integrated into aerial adventure parks and zip line courses, the guests’ desire to see, and share, their photos translates into an uptick in profits for the operation.

There are several photo systems specifically designed for aerial adventure operations, and all have their benefits, depending on the needs of the operator. The technology has evolved quickly in recent years, as have guest expectations. Advanced photo services are becoming the norm, so parks are making moves to keep up and realize the benefits of what these systems offer.

According to Adventure Park Insider’s inaugural 2016 State of the Industry survey, 25 percent of commercial, pay-to-play respondents reported that they plan to add photo services to their operation this year (and the 2017 survey shows a similar trend for next year). For those that already had photo services, a majority said that the revenue generated from the services accounted for 10 percent or more of total revenues.

Automated photo systems can benefit any aerial park regardless of geographic location, size, or visitation. Integrated systems enable employees to focus on their responsibilities of guiding tours, customer service, and guest safety.

But automated or manual, photo services add to a great customer experience, in part because visitors now expect them. Those images also become great marketing material when they have the park’s logo and hashtag and are shared on social media. Furthermore, as technologies evolve, the system providers continue to advance their software and hardware capabilities to meet consumer and market needs.

Nailing excellent action shots at aerial adventure parks—the ones that customers want to purchase, download, and share on social media—requires strategic camera placement, timing, and turnover. Plus, production of the photos themselves needs to be timely, and the purchase process convenient.

Case in point: Catalina Aerial Adventure and Zip Line Eco Tour, located on Catalina Island off the coast of Los Angeles. It recently replaced its old single-camera system with an automated photography system from Snapsportz. The system uses RFID (radio-frequency identification) tag technology to capture and sort pictures of each customer individually. Three cameras were integrated on the zip line course, and four cameras on the aerial adventure course.

RFID tags on guests’ helmets trigger Snapsportz’ automated photography system, and also organize the photos by tag, so guests can easily view and purchase them.

As a result, the percentage of guests who purchased photos grew from 20 percent to 35 percent and is still on the rise, says Catalina’s zip line operations manager Reed Woodward.

That’s what suppliers have been saying for years. “We provide operators with the technology we’ve created and they can use the photos for selling or social marketing benefits,” explains Snapsportz founder Ben Kottke. “We also provide handheld solutions, but our core mantra is to automate. Our systems automate what professional photographers can do in areas where there is repeated behavior.”

Fotaflo also offers an option that uses barcodes to track and organize automatically captured photos—however, that’s not what it recommends for operators. “The quality of the photos is typically lower because it’s automatic,” says Fotaflo marketing manager Jesse Walsh. She says that when guides take the photos with a handheld camera, the images often come out better, and it also “increases interactions between guests and guides. Guests usually give a much better rating” because of the added engagement. “It makes it a part of the experience,” she says.

Ultimately, operators have different needs and considerations, and both approaches can be successful.

For its automated system, Catalina worked closely with Snapsportz to establish the placement of the cameras on the zip tour and adventure park. “They brought handheld cameras and did two site visits before we finally agreed,” Woodward says. The crew photographed zip-liners in several locations and determined the best angle based on the background and the pattern of the sun. Was it beautiful most of the day, or backlit and impossible to see anything? “That was a big part of the process of determining how to maintain the quality of the photo throughout the whole day,” he explains.

Similarly, Fotaflo worked with Treeosix Adventure Parks (Saskatchewan, Canada) CEO Jori Kirk very closely to establish the “Fotaflo hierarchy:” Certain locations where images are most important, especially because Kirk decided to establish a guide-controlled, manual photography system. Each guide uses a Samsung smartphone to take pictures, which automatically upload to the software system and funnel back to the office where guests can view the images on a display screen post-tour. 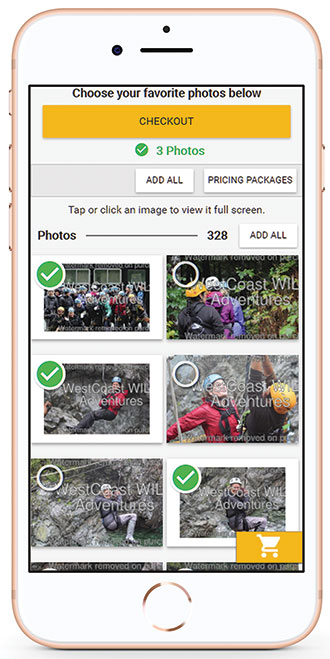 Picthrive—a software platform that parks use to sell photos and videos, and to market via social media—offers a different service and business model. There are no contracts or upfront fees. Instead, Picthrive charges a $3 fee if a photo album is purchased at the park’s POS. If guests don’t have time to stay and browse photos after the tour, they can visit Picthrive’s online store. “From the online store, there is a 20 percent commission, they get unlimited uploads, and we provide 24/7 support,” says co-founder Neal Belovay.

The company views itself as a business partner with the operator. “A transaction occurs only if they are successful with sales. Our goal is to help them,” says Belovay.

Snapsportz likewise incorporates a shared revenue model. “We were impressed with Snapsportz’ involvement in the process, because they offered a revenue-share model,” says Woodward. “They’re only going to do as well as we’re doing. They have more skin in the game. They react better and faster [when we need technical support—and we’re on a remote island].”

Fotaflo also features a tiered revenue share based on the number of photos that are sold. The greater the number, the higher percentage of the profit that belongs to the operator. “We have a partnership approach. There is an initial set-up fee that we split, and we take a percentage of photo sales moving forward,” says Walsh. “It keeps us invested in their success. We want them to be successful, because that’s how we’re successful as well.” 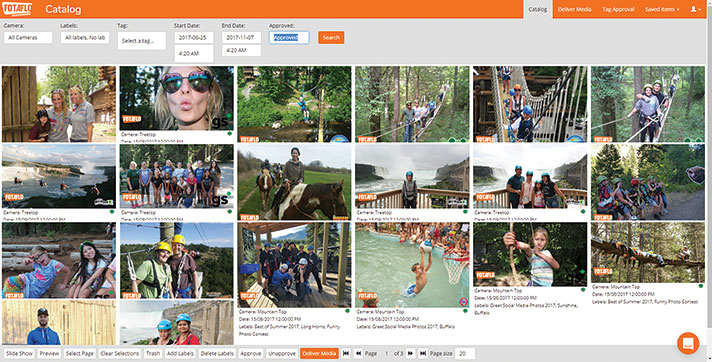 Fotaflo clients use the company’s app to select and deliver photos to their guests.

How much does a system cost? That depends, mostly, on the number of cameras—which is contingent on what makes sense for each park. For Catalina Island, the system it integrated cost $45,000, which paid for itself in the first three months.

“In Hawaii, the return on investment—assuming that the operator has two to three cameras—would be a few months, tops,” says Kottke.

For clients of Action Photo Systems, which specializes in zip line and aerial photography solutions, a typical three-camera system costs about $25,000. “That cost includes the server, two point-of-sale kiosks, and the RFID tags. If they want more cameras or printed photography, those things are add-ons,” explains co-owner Nate Pfefferkorn. The company’s clients usually see the payoff in three months to a year, he says.

Maintenance of photo systems is relatively simple. Typically, software updates occur automatically, and hardware maintenance is minimal. Kottke says, “Usually, maintenance—what is needed to keep the system running—is only required every couple of years, when we need to swap things out.” Often, a remote Wi-Fi antenna will need more attention than the cameras themselves. After many years of use—something like 500,000 photos—a camera might need to be replaced.

And if a glitch or issue ever popped up, Snapsportz is virtually available 24/7, Woodward says. “Snapsportz is very responsive. We get email alerts every time something goes down, so we hear about it immediately. If it’s something that they can work on themselves, they work on it remotely and it’s generally fixed within the hour,” he says.

Experience in the field has revealed some challenges—and spurred solutions. One aspect to consider is the strength of the site’s Wi-Fi connectivity. If a park’s location does not have reliable internet, it may want to consider having an on-site server versus uploading images to the cloud via Wi-Fi.

Case in point: Treeosix Adventure Parks is so remote that it was necessary for Kirk to opt for the Samsung smartphones as cameras. “In an area that is really rural, the devices that we use for photos need to be able to upload the photos quickly by connecting to cell phone towers rather than Wi-Fi, so that the images arrive at the office before the guests return,” he explains.

Walsh says one of Fotaflo’s clients is a boat tour in Alaska with no connectivity for much of the tour. “They signal to guests once they’re within Wi-Fi range so guests can check for photos while they are still on the boat,” she says.

Another factor to consider is the location’s power source. Catalina Island, for instance, draws power for lights and electrical equipment from solar panels. Once the automated photo system was added, the batteries that store the solar power could not replenish at a fast enough rate to support the new energy needs. As a result, up-to-date battery banks have been introduced, and more upgrades are ongoing. However, for now, says Woodward, when it’s not sunny, the system sometimes goes down—resulting in a loss of revenue and disappointed customers.

Where are photo services headed? Several developments are in the works.

Companies are adding a video component. Snapsportz is introducing the ability to host 10-second-long video clips. Eventually, those clips will be automatically spliced in a prearranged film, canned, and offered to guests to share. Videos require more data than photos, ergo, a larger server is needed to accommodate and process the data.

Fotaflo is also launching an automatically compressed video clip—like a highlight reel—that is sharable on social media with an intro clip, outro clip, and three clips taken during the tour. It is launching the video component later this year, and at no additional cost, because it sees the market value.

Free photo services could also become a trend. When Kirk crunched the numbers, he realized that 30 percent of his customers were not buying photos. But he also realized that referrals from that 30 percent would generate more revenue than photo sales to them would. The decision to offer free photos to everyone was easy to make. The change also streamlined the customer service—employees don’t need to spend time explaining the photo packages—and the satisfaction rate of the tour photos jumped to 98 percent.

Photo services also provide useful customer intelligence. Fotaflo, for example, is able to provide its clients with extensive marketing data. “We are able to track all photos and the activity that happens: how many times they were shared, emailed and downloaded, and how many times Facebook guests viewed and liked the photos,” Walsh says.

Action Photo Systems is focused on developing its partner base. “Any additions or changes [to the system]will be incremental at this point. We’ve developed the system to a point that is 100 percent reliable with 100 percent capture rate. Now we just want to work with people to get photos to their clients,” says Pfefferkorn.