When we launched Adventure Park Insider (API) in 2015, our sister publication, Ski Area Management (SAM), was seeing a boom in summertime offerings at ski resorts, including all manner of aerial adventures. To address the growing trend, we started Summer Ops Camp. The three-day event gathers operators, vendors, and experts to explore summer business trends and opportunities in an immersive, hands-on format. It is an exciting convergence of the two worlds our publications serve that benefits both audiences.

There was no clearer picture of that than our recent Summer Ops Camp, where more than 80 API and SAM operators and suppliers came together in person to play, discover, and network at Quebec’s biggest four-season resort, Mont Tremblant.

Tremblant was chosen as the host site for its high concentration of broad summertime offerings at the resort and nearby, including a ZipTrek Ecotours zip line tour, a Moment Factory “Tonga Lumina Night Walk,” a Le Luge downhill cart track, a beautiful base village, a via ferrata, the new netted attraction Upla from The Trekking Group, and the new EAK Treetop Walk Laurentides.

Education sessions offered many expert insights, best practices, and inspiring ideas. One key trend shaping the industry: The modern consumer is on the hunt for memorable outdoor experiences—not just activities.

Below are some snapshots from the event. For a full report with more educational takeaways, head to adventureparkinsider.com. We hope you can join us to explore all things summer ops next year when camp goes west—location TBD. 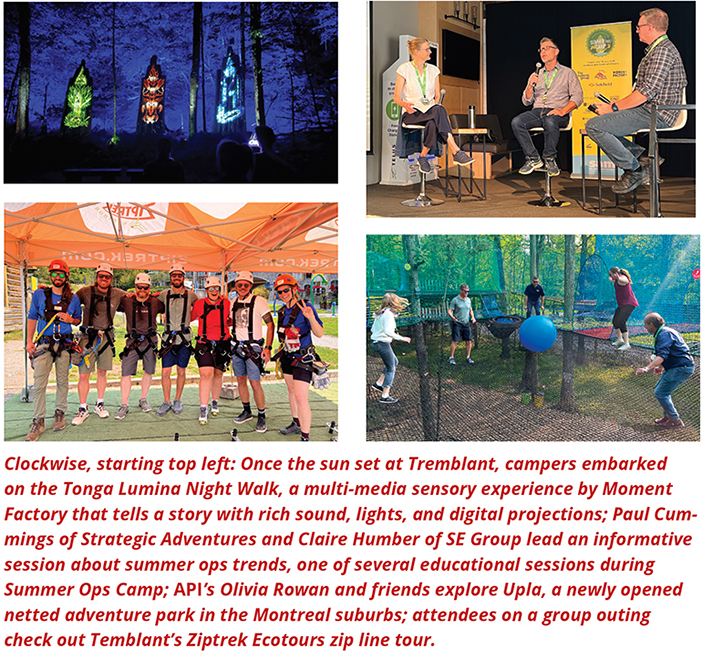 Hand braking on zip lines has long been an accepted practice. As zip lines have grown in length and increased in speeds, though, it’s become apparent that there are limitations to the use of hand braking. Just what those limitations are, and how they should be treated in the ACCT standards going forward, has been the subject of a good deal of research and much discussion.

The discussion came to a head in June when the ACCT Technical Information, Research, and Education (TIRE) committee released a technical advisory on hand braking. The advisory is based on years of research and development on a proposed draft standard that would update the current ANSI/ACCT 2019 standards.

Given the critical role that braking plays in guest safety on zip lines, the committee felt a need to present some of what it has learned as it writes new rules and promote best practices sooner rather than later. It will be months, and most likely years, before a new standard takes effect, though.

Risk factors. The advisory itself outlines the relationship between zip line arrival speeds and risk of injury, and it recommends steps operators can take to limit or reduce the risks. It describes several of the key factors that determine the level of risk, including reaction times and stopping distances, as well as the experience levels of guests and guides.

Given that many guests are new to zip lines and are inexperienced at hand braking, the advisory cautions against relying on “participant actions to provide the primary brake” and notes that such actions “must be backed up on lines with arrival speeds above 6 mph.” (Read the full advisory at acctinfo.org.)

The advisory urges operators to gather data to determine the actual arrival speeds on each of their zip lines, and to ascertain whether guides have sufficient strength and time to react when deploying guide-activated brakes.

Of course, there are many variables that determine the arrival speed of a particular zip line guest, including wind, temperature, moisture, and guest weight. But ultimately, it is the arrival speed that contributes most to the level of risk faced by each guest. So, the committee is focusing a good deal of time on considering how to account for that in the proposed draft standard.

Klajnscek and Haras offered no specific numbers—the “bandwidths” have been subject to frequent modification as the committee has proceeded with its research—but we would guess that the arrival speed levels being considered are, roughly, 0-6 mph (gravity brakes), 6-15 mph (low speeds), 15-25 mph (medium speeds), and 25 mph and up (high speeds).

Open to input. The TIRE committee members emphasized that once the proposed draft standard is approved for public comment, which could be soon, operators will have the chance to provide feedback. Will the response match the data? Do the proposals make sense in the real world? The advisory itself evoked only a small response, and Klajnscek and Haras are looking for more input.

“If there are people out there who have information that is convincing, put in your comments during the comment period,” Klajnscek urged. “But don’t just pull it from the sky.”

API will take a more in-depth look at the discussion around hand braking in an upcoming issue.

About the Brake Advisory

The Association for Challenge Course Technology (ACCT) seeks to advance the industry and enable members’ ongoing success. The “Advisory for Zip Line Brake Systems” is a work product of the Technical Information, Research, and Education (TIRE) committee and represents a consensus of members of the TIRE committee. The content of the document is not a new ANSI/ACCT standard, nor does it alter or interpret an existing ANSI/ACCT standard, and may not represent the official position of the ACCT.

The article “Staying Connected” in the Summer 2022 issue of Adventure Park Insider should have said that of the 150,000 Kong “CouDou Pro CS Evo hooks” in use, none have had to be replaced for wear; not the Kong “lanyards” in use. We apologize for this error.