To say that 2020 has been a challenging year would be a wild understatement. The COVID-19 pandemic and ensuing economic repercussions sent most recreation-oriented businesses into a tailspin. Figuring out how to keep these businesses afloat during these unique circumstances has required extraordinary effort and imagination. Many adventure park operators have not only risen to the challenges, they’ve succeeded beyond all reasonable expectations.

While there’s no shortage of creative ideas in the outdoor recreation industry, Adventure Park Insider uncovered three operations that have adapted extraordinarily well to the crisis. Through ingenuity, thoughtfulness, and even sheer luck, these parks are keeping their bottom lines viable, their guests happy, and their staffs engaged.

North Shore Adventure Park in Silver Bay, Minn., is only in its second year of operation. It relies on its location, along scenic route 6, to keep business humming along. North Shore enjoys a fair amount of traffic under normal circumstances—nearly 10,000 cars pass by the park on peak days, most of them occupied with families and visitors from the Twin Cities and Duluth metro areas.

When the COVID-19 crisis hit, the park suspended operations, like nearly all businesses nationwide. When local and state regulators began to slowly allow businesses to open up again at the end of May, owners Phil Huston and Alice Tibbetts sprang into action to meet what they hoped would be pent-up demand for recreation.

Of course, they knew they would have to limit operations under new guidelines. “Last year we hosted 250 to 300 people a day, but this year we’ve capped our daily count at 200,” says Huston.

With the lower numbers, the park now has 10 to 12 staff versus the 20 it had last season. That proved sufficient for successfully guiding guests through the 75 treetop obstacles, which include 10 zip lines. 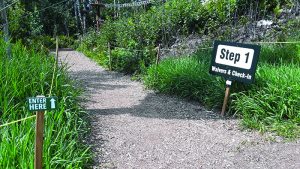 To ensure that guests used the one-way trail system as intended, the team at North Shore Adventure Park installed wayfinding signage along the paths.

Social distancing. To comply with social distancing guidelines, North Shore used the shutdown to make a few changes. First up was widening the 500 feet of trail that leads from the parking lot to the adventure park. Not only did the park widen the trail, it divided it into two separate one-way trails to and from the base area, to keep the traffic dispersed and flowing.

To ensure that guests use the trails as intended, the team at North Shore installed plenty of wayfinding signage that clearly guides guests along the beautifully mulched and landscaped paths. In addition to its own signage, North Shore adopted some other locally developed signage, including the innovative “one moose apart” distancing instructions created by Cook County.

The cabana approach. Back in the carefree days of 2019, North Shore had put out a few picnic tables around its grounds to help make guests comfortable. This summer, the park took this idea a step further: It added more picnic tables, which guests can now reserve in advance. All tables provide plenty of social distancing, even privacy.

“We’re lucky in that we have a fair bit of land to work with,” says Huston. “So, we carved out areas in the woods that are both part of the action, yet private, and added picnic tables, garbage cans, and lockers at each site.”

Guests can reserve these tables (three hours for $25) at the same time as they book their two-hour adventure packages online ($54 per person). After each party departs, staff come through to sanitize the tables before the next group arrives.

“There’s been no price resistance to this added feature, and guests really enjoy having their own, safe area to relax in,” says Huston.

Added revenue. While the picnic tables have made up for some of the lost revenue due to lowered capacity, another area that took the owners by surprise was glove sales.

“When our guests book their visit on-line, they have several add-on options, including purchasing their own sets of gloves,” says Huston.

A positive byproduct of sanitization concerns is guests are snatching up the gloves in droves. “Even guests who order 10 passes are buying 10 sets of gloves, which we sell for $7 a pair. Thanks to these sales, the cost of our in-house gloves are nearly covered,” Huston says.

Kerfoot and Brainerd Canopy Tours: Sticking to the Outdoors

Also in Minnesota, Kerfoot Canopy Tour in Henderson and its sister company Brainerd Canopy Tour in Brainerd, about three hours away, have responded to COVID-19 in innovative ways. 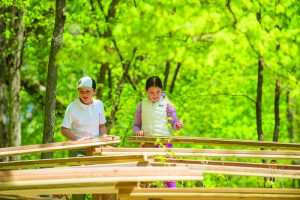 Kerfoot Canopy Tour introduced the Great Minnesota Ball Run to capitalize on families with younger kids who may not have visited the park otherwise.

Owner Lee Kerfoot says that social distancing and touchpoints prompted both parks to rethink operations. For example, prior to COVID, the arrival process was typical. Before guests began their aerial adventures, they needed to sign waivers, oftentimes on site—an action that has become a contact concern. That process has changed.

“We used to have waivers that could be signed on paper, on tablets, or online,” says Kerfoot. “We’ve now created a sign with a QR code allowing people to use their own phone to sign the waiver if they didn’t sign it in advance of arrival.”

Shorter time slots. While adding sales is key during these times, Kerfoot recognized that the pandemic has had a profound economic impact on many of their guests. So he now offers less expensive, one-hour durations in addition to the standard two-hour time slots.

“The lower price option is making it more affordable for the people who are really hurt by the economy,” says Kerfoot.

Income from kids. The parks also looked to kids to generate added income. “We heard that families with kids younger than seven—our minimum age to go in the adventure park—were not coming until their youngest was old enough,” says Kerfoot. “So, it made sense for us to add something for younger kids, too.”

The activity Kerfoot settled on? The Great Minnesota Ball Run, where guests roll wooden balls down a 400-foot-long track with various elements and obstacles. The track meanders down through a forest slope and is low-impact entertainment for the whole family. At the end, guests can run their ball through the track again or pocket it as a souvenir and call it a day. The new activity costs $8 as a standalone or $5 as an add-on.

Retail in the outdoors. Management at the parks also realized that guests were reluctant to head indoors in the current environment, which would have a considerable impact on their retail sales. So, since they offer outdoor adventure, they decided to move some of their retail outside, too. 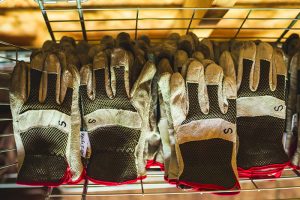 Both North Shore and Kerfoot added gloves to their retail operations, something that has been more popular than in years past.

To put some numbers to the increase, t-shirt sales were up 33 percent, which translates to an additional $1.10 per participant, in July 2020 compared to July 2019.

The rack is positioned where guests wait to zip line, which gives them plenty of time to peruse the options. “We also had a better selection of t-shirts,” points out Kerfoot, “which might have helped move the needle some. The only thing we would consider adding are hats.”

Glove love. Rounding out the added revenue opportunities, as with North Shore Adventure Park, Kerfoot reports that buying gloves has been more popular this year than in the past.

At Louisville Mega Cavern in Louisville, Ky., operations were shut down between March 17 and June 17, which allowed management to take a good, hard look inward. 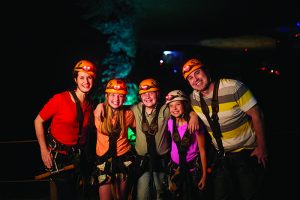 Louisville Mega Cavern reduced
capacity, reduced staff, and increased wages. As a result, both guests and staff are happy with their experiences.

The value of company culture. “COVID-19 shows us how critical work culture is,” says Charles Park, executive VP. “In the past, I would walk into an area of operation to find 12 staff, 10 of whom weren’t doing much of anything while the other two were working hard.”

During the three-month shutdown, on the other hand, Park was thrilled with the response of his reduced staff. “It was amazing to me to see how staff stepped up during the crisis,” he said. “No job was too small. Our staff worked tirelessly across our four operations doing whatever was necessary, from cleaning bathrooms to operating forklifts. The best way to put it is that our staff is now battle-tested, and there’s nothing we won’t do for one another.”

When Louisville Mega Cavern re-opened its doors to the public in mid-June, it did so with 50-60 staff, down from the 80-110 typically employed during the summer months.

“When we re-opened, we increased our hourly wages, because employees would be working in much smaller teams, and we wanted to reward them better,” says Park. “We’ve also introduced a type of meritocracy—if you work hard, you get a raise.”

And the gamble is paying off—Mega Cavern routinely sells out, though at a reduced capacity, and both guests and staff are happy with their experiences.

“I have a poster in my office of a quote by Jeff Bezos,” says Park. “It reads: ‘What’s dangerous is not to evolve.’” For adventure parks across the country, this sentiment couldn’t be more true.