As educators across the country navigate an array of approaches to the new school year, adventure parks are amending operations to accommodate the “new norm” of remote school and work. Parks have come up with a number of creative responses, from providing quiet places to study to creating experiential science classes that meet state standards. 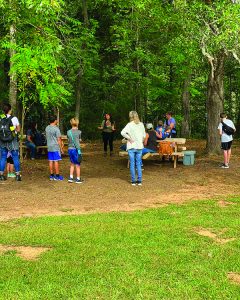 says the science-based Barefoot Academy program is structured around helping traditional homeschool kids, as well as kids who are home this fall due to COVID, meet state requirements.

Barefoot Acres, a 52-acre farm as well as an adventure park with a high ropes course and racing zip lines, opened just three months ago. The original intent was to draw folks in with the adventure side and eventually use the farm for education. However, the pandemic brought that goal to fruition sooner than planned. “My wife and I have 12-year-old twin boys that were all of a sudden home from school,” says Prosser. “We realized we needed to do something, and do it now.”

Barefoot Academy programming is split into two parts: 1) A science-based STEM curriculum that’s focused on South Carolina standards; and 2) An outdoor adventure-based program geared toward teaching adventure and outdoor skills. The curriculum was put together using state standards, and the Barefoot team worked with an educator to make sure they had some checks and balances in place.

The curriculum, which targets grades K-8, consists of 9- to 10-week semesters. Classes run three hours a day, and alternate between science and adventure programming. One day might be earth science and soil sampling, the next plant life and ecosystems. After four days of varied learning, the fifth is an elective day, where students decide what they want to do. Depending on kids’ school schedules, they can come every day during the week or float in and out throughout the semester. Parents are required to attend with their child or a group of kids so they can report back to the school that the requirement has been fulfilled.

The inaugural Barefoot Academy kicked off on Sept. 24, with classes taught by several staff members who have backgrounds in environmental education and natural resources. Twelve families were enrolled at press time, accounting for about 30 kids.

The Adventure Park at Sandy Spring

The Adventure Park at Sandy Spring in Sandy Spring, Md., has made a host of adjustments to help families with the school/work balancing act. “Everyone’s reinventing what their family entertaining and exercise looks like, and we’re reinventing the park to go along with that,” says owner John Hines.

Sandy Spring has added hours to accommodate kids in the surrounding school districts who are remote learning this fall. Since most schools have Wednesdays off, the park opened on Wednesdays from 10 a.m. to 8 p.m. as well as Fridays from noon to 9 p.m. in addition to its usual Saturday and Sunday hours. Hines estimates that 300-400 climbers have shown up between Wednesday and Friday each week and purchased full-priced tickets, which helps offset the loss of fall group business.

The park has also added a two-hour ticket—shortened from the typical 3.5-hour—as well as a five-visit punch pass good on Wednesdays and Fridays this fall only. The option gives kids an easy window to exercise and get outside in between classwork.

To assist the school/work component, the park beefed up wi-fi and added electrical-outlet drops in its tented pavilion to create a free outdoor work space for kids and parents. In addition, more than a dozen picnic tables are spaced for social distancing.

Hines says everything is structured so families are encouraged to hang out all day. This includes a new food truck on premises that serves lunch and dinner. With traditional schedules out the window, he says, families are more apt to come to the park at 2 or 3 in the afternoon and hang out the rest of the day.

In August, staff at the Adventure Center of Asheville (N.C.) could see this would be a different sort of year. “When schools were deciding what they were doing, we pulled the camp staff together to think about what we could offer in terms of fall programs,” says group sales coordinator Sarah Dickson.

In addition to the educational component, park staff was motivated to help provide some of the things kids were missing by not being in the classroom: socialization, exercise, and engagement.

The first, Adventure Afterschool, targets kids ages 5 to 8 and 9 to 15 with immersive outdoor education, experiential science lessons, teambuilding, and outdoor wilderness skills. The program takes place three days a week. A typical day might include immersive learning in the form of plant identification or a lesson about the laws of gravity using the treetop adventure park. The idea is to get kids outside to supplement, not take the place of, what they’re learning in school. “We’re not replacing school, rather trying to match what kids are learning in their online classes, but make it fun and exciting,” says Dickson.

The second program, the KOLO Bike Park Afterschool Bike Club, is an extension of the park’s popular summer bike camps, which teach kids and teens mountain bike skills. The camp, which runs three hours on Tuesdays and Thursdays, hosts 9- to 15-year-olds in the Big Senders group and 5- to 8-year-olds in the Little Rippers. Groups are limited to 20, and both sold out early with a waitlist.

Local Asheville kids were scheduled to head back to the classroom in October, says Dickson. Still, the park is brainstorming if—and how—to continue the programs, assuming kids will have limited extracurricular options for awhile.