You are at:Home»Articles»Building with Accessibility in Mind
By Donna Jacobs on January 3, 2022 Summer 2021

As the pool of outdoor participants continues to grow, the need for inclusive attractions expands with it. Here are three recent projects that aim to provide a little something for everybody.

The 1,104-foot Redwood Sky Walk, located at the Sequoia Park Zoo, reaches 100 feet above ground at its highest point, with many platforms sitting about 60 feet up in Eureka’s old-growth redwood forest. Designed and built by Synergo, it was set to open June 4, 2021.

An ascent ramp provides access to the canopy walk. At 383 feet long, the ramp is roughly the length of the tallest known living coastal redwood tree, so walking it becomes a sort of virtual “redwood climb.” No actual climbing is involved, though; the ramp, like most of the Sky Walk, is ADA accessible. Synergo increased elevation slowly to ease participants into the heights. The attraction is entirely open access and belay-free. 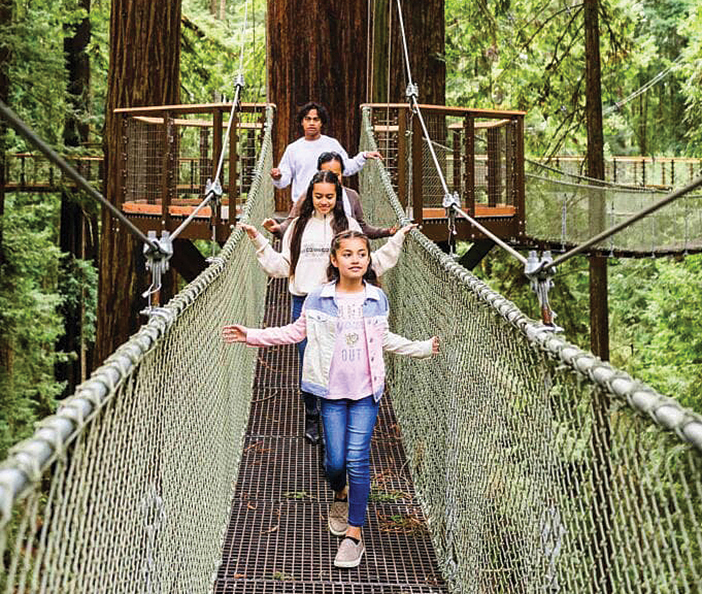 Most of the Redwood Sky Walk at the Sequoia Park Zoo is ADA accessible. Parts that aren’t, like the catenary bridges are open access.

“On our end,” says Synergo co-owner and CEO Erik Marter, “we were excited about getting people off of the ground and into the branches and canopy of the forest. We wanted to make it as accessible to as many people’s abilities as possible, while still providing some challenge and excitement.”

Utilizing a tight team of riggers and carpenters, Synergo began the build in June 2020 after a year of R&D in partnership with the zoo and design and management firm Greenway Partners. The project took 7 months to complete.

To minimize the environmental impact of the installation, the crew “stayed off of the ground as much as possible to avoid soil damage from root compaction,” says Marter. “Once the project was done, you couldn’t even tell the crew had been there.”

The nine platforms utilize Synergo’s normal design “reworked,” Marter explains, built so they’re not right up against the tree, as always, with the added ability to open and close like a camera lens to adapt to different tree sizes. The most labor-intensive part of the job was pull testing the brackets that connect the bridges to the platforms. It took half a day to two days each depending on load requirements. “We had to do 32 of those tests,” says Marter.

The elevated walkway blends in with forest as much as possible. The ascent ramp and launch deck are wood structures with concrete foundations and surfaced with Dynaplank (a walkable tread surface that is non-slip and durable). Posts and handrails are redwood, and metal panels are infilled between posts. Fabricated aluminum was used for the bridges and platforms, which have the same Dynaplank surface for walking, with railings made from cable and metal mesh panels.

When choosing a site for its Forest Canopy Walk, the Vermont Institute of Natural Science (VINS) had two main goals: get everyone into the trees at elevation, and minimize environmental impact.

“We looked at various sites when we were trying to place the walkway,” says lead builder Robbie Oates of Phoenix Experiential Design. “By utilizing the topography, we were able to eliminate a lot of the design challenges that come with building for ADA access.”

The natural elevation variations of the land, which slopes toward the Ottauquechee River, allowed the crew to forego structural elements with big footprints, like long access ramps or lifts, and build a canopy walk that remained largely level as the ground dropped away beneath it.

The Treehouse, an emergent tower on the VINS Forest Canopy Walk, allows visitors to reach 100 feet above the forest floor without the need for ropes and harnesses.

The 815-foot wood-structured boardwalk quickly puts visitors roughly 50 feet up in the trees. The walk’s 42-inch-high wood and mesh guardrails allow views of the woodland “for both young and old, regardless of one’s eye-level height,” notes VINS programs director Chris Collier.

The landings, constructed of semi-solid wood plank decking, are connected by semi-transparent fiberglass grate walkways that shed rain and snow. “For anyone with a fear of heights, the ‘solid’ platforms of wooden decking provide a goal and relief as one moves along the fiberglass grating to the next platform,” says Collier.

The design has several other access-conscious touches. Benches offer respite throughout the walk, which visitors take at their own speed. The entry approach path is constructed of small, crushed stones set in a plastic grate for wheelchair and carriage access.

The whole family can play on the VINS Forest Canopy Walk Spider Web, an open access net suspended 40 feet in the air.

Three feature nodes, while not ADA accessible, are open access. The first is the Spider Web, a 20-foot-diameter, three-layer net suspended 43 feet in the air. Next is the Eagle’s Nest, a two-level viewing platform that includes an eagle sculpture with an 11-foot wingspan in a rebar nest. Third is the Treehouse, an emergent tower with a helical staircase that brings visitors 100 feet above the forest floor.

Architect Tom Weller’s love of natural geometry informed the boardwalk’s design. “Each platform showcases a different geometric shape: a pentagon echoes the shape of a tree leaf or paw print; a hexagon reflects the form of a honeybee’s hive or the plates of a turtle’s shell; an octagon nods to the eight-legged spider’s web,” he says.

The Forest Canopy Walk was a collaborative effort. VINS staff supported Weller’s firm Weller & Michal Architects in the design. Phoenix Experiential Designs led the aerial construction with a team of riggers, while local firm Trumbull Nelson Construction supported on the groundwork and Thayer Fellows served as the structural engineer.

The VINS Canopy Walk remains level as the ground drops away, putting visitors 50 feet up with no ramps or steep climbs.

“The collaboration process was really just a joy,” says Phoenix’s Oates. “We had to modify as we went along, and we were able to work with each other to make changes really efficiently.”

Of course, VINS’s investment in the Forest Canopy Walk was made with the nonprofit’s long-term financial stability in mind. A benefits study conducted prior to the installation’s approval by the board of trustees projected the attraction would result in approximately a 62 percent increase in visitation, according to Collier.

Since the attraction opened in fall of 2019 and the pandemic forced VINS to temporarily close in March 2020, “this year and next will be the true test of whether we can achieve that [visitation]goal,” he says.

Tree-Mendous is designing a hybrid attraction for the National Arboretum in Washington, D.C., that combines elements of a more traditional canopy walk with the company’s “Nature Trek” and Net-Scape netted attractions. The project, which is still in the development stage, aims to “provide an attraction that aligns with the Arboretum’s commitment to education, accessibility, and inclusivity, and offers an activity for guests of all ages and abilities to enjoy together,” says Tree-Mendous owner Gerhard Komenda.

The walk will feature a series of aerial ADA-accessible bridge trails, dynamic suspension bridge trails, and a Net-Scape feature that will double as a play area and a unique learning space for outdoor educational programming.

The site offers variation in elevation and scenery and is surrounded by the forests of the Arboretum. Bridge trails, which will use black locust and eastern white cedar to achieve Tree-Mendous’ signature natural textured look, will crisscross over and along a natural water feature.

The attraction will be a directional through-walk. In phase 1, about 500 feet long, guests will start on the ADA bridge trail. At platform 7, they’ll have the option to take an exit ramp or continue on to the open access suspension bridge trail. Bridge heights will range from 15 to 50 feet above ground. The experience will run at least 30 minutes, says Komenda. Educational and STEAM elements will be incorporated into the design to offer longer experiences catered for educational programming.

Details for the construction timeline are still being finalized.