From canyons to caves, swamps to the sea, and cities to the country, adventure parks not only provide lively opportunities to enjoy the outdoors, but also chances to develop an appreciation for the location, environment, and history. In these instances, the location becomes the park’s identity. 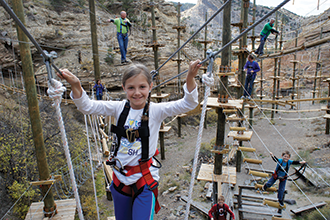 Captain Zipline in Colorado is perched on the edge of a rugged box canyon, and has been heralded as a place where Indiana Jones meets Spider-man.

According to Holmes, the key to the success of any park is having extraordinary scenery and telling a good story.

“There are hundreds of zip lines in the U.S.,” he says. “Five years ago, all you had to do was build one. That has changed. You can’t just make it higher, faster, and longer. People come for a zip line experience, but they talk about everything else, like how fun the guides were, how they felt safe, and what they learned about the area’s natural history.”

This Rocky Mountain operation, about three hours from Denver, sits on the Arkansas River in a county with 14,000-foot peaks and several old silver mines. So geology, the Wild West, and mining lore are in the park’s adrenaline-inducing DNA.

Holmes bought the rugged, 25-acre Lost Canyon parcel to build vacation homes, but that didn’t work out. As a man with adventure in his blood—he tagged sea turtles in Costa Rica in 1969, and at one point sold salt and tobacco to New Guinea headhunters—he wanted to utilize the property in a unique way. So, in 2004, he Googled “zip lines.” That didn’t produce many results, so he saw an opportunity. Soon after, he opened Colorado’s first zip line attraction.

Holmes built a park heralded as a place where Indiana Jones meets Spider-man. “This is a one-of-a-kind rugged box canyon,” he says. “It’s a natural to zip over it and have an aerial park. The canyon was way underutilized. The canyon really just spoke to me to make it special.”

Capitalizing on the Landscape 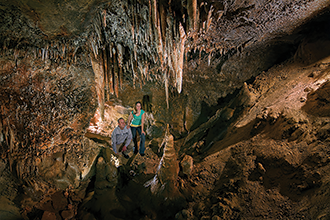 Cave of the Winds Mountain Park started with just cave tours, and now has adventure attractions over and around the canyon outside.

Cave of the Winds Mountain Park in Manitou Springs, Colo., is another canyon attraction. More than 130 years ago, two brothers stumbled across a cave in the Pikes Peak foothills. Now, thrill seekers soar above, plunge down, and teeter along the edge of its spectacular Williams Canyon neighborhood.

The operation started as cave tours, but the group of owners eventually wanted more adrenaline to blow through the air. So a trio of attractions has been added in the past seven years—the ropes, beams, and ladders of the Wind Walker Challenge Course; a family-friendly out-and-back two-seater Soaring Eagle installation called the Bat-A-Pult; and a free-falling aerial dive ride, appropriately named Terror-Dactyl.

“The canyon was the perfect location,” says supervisor Aaron Friese, and builders took good advantage of it. The challenge course protrudes about 20 feet off the canyon’s edge, with the canyon floor 600 feet below. The 1,200-foot-long Bat-A-Pult crosses from one side of the canyon to the other, at a speed that allows riders to take in the rugged-yet-beautiful surroundings.

Friese says the Terror-Dactyl is the only ride of its kind in the world. Terror-Dactyl riders are strapped into a two-seat chair perched at the edge of the canyon. The chair is connected to the far-reaching end of the erector set-looking structure by a single cable. When ready, the chair tilts 90-degrees forward before it’s released, dropping riders 180 feet into the canyon at speeds approaching 100 miles per hour. After swinging back and forth a few times, the chair is pulled back to the station.

The extreme nature of the ride comes with size and weight restrictions, and it doesn’t operate in rain, or winds that exceed 10 mph.

Soaring Eagle Ziplines prefabricated the structure and shipped it to the park. Outdoor attractions supervisor Chris Obert, who was on hand for the Terror-Dactyl assembly, recalls that the ride arrived in four or five large pieces, each weighing about a ton, with the biggest section about 30 feet long. It included the ride’s basic framing, deck levels, wire ropes, cables, trolleys, and chair.

But the unique location and existing infrastructure at the park made construction a challenge. “We had to use a crane to lift those huge pieces up and over our gift shop and then put it all together,” says Friese. Much of the structure overhangs the edge of the canyon. 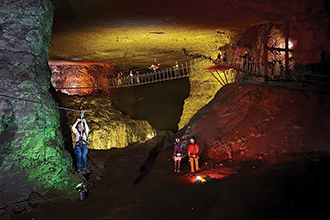 The Mega Zips inside Louisville’s Mega Cavern is one of its many, entirely-underground attractions.

In the case of the capacious 100-acre Louisville Mega Cavern, location is the absolute soul of its identity. The current owners purchased the old manmade limestone mine to build a high-security commercial storage facility. They went through some 12 years of permitting because of its unique location, and had to build up the floor before creating roughly 17 miles of roadways and corridors inside the cavern under the city. The storage facility, Louisville Underground, is still operational today and stores a large variety of goods, including boats, autos, and RVs.

“All of our attractions and services do exist inside of the cavern, and so the cavern is directly linked to all aspects of our identity, from our storage facility, our tourist attractions, and even many of the dozen businesses that operate from within the cavern,” says social media and marketing director Jeremy Priddy.

He says Mega Zips is the only underground zip line adventure in the world, and the novelty of zipping underground as opposed to above a tree canopy offers a unique option for seasoned zippers. But with millions of additional square feet of space to work with, Mega Cavern is looking to expand. “We continue to search for new and unique opportunities not available in the immediate region to add to our list of attractions,” Priddy says. “Inevitably, whatever we add, the chances are it will be the only underground version, at least locally. This is a huge part of the Mega Cavern identity.”

The caverns were once designated as a potential fallout shelter during the 1962 Cuban Missile Crisis. Displays along the Mega Quest routes make reference to that piece of history, and to its limestone mine origin. The gift shop features rare mining rocks, helmets, and the consummate subterranean t-shirt—which reads, “I did it underground.”

Mega Cavern is under a city, but Montreal’s Voiles en Voiles is smack ensconced in one.

Before the Old Port aerial adventure park along the St. Lawrence River opened in the summer of 2015, its three owners did some brainstorming. It helps that they also own a Quebec tourist attraction development and management company, so they knew the Old Port drew some 6.5 million visitors per year to its attractions and activities, such as the science center, shops, urban beach, active tours, and more.

Now customers climb aboard life-size replicas of an 18th century Royal Guard ship and a sinister pirate ship to do more than walk the plank. Climbing walls, bridges, ladders, gangways, hanging nets, and more are all part of this adventure park at the port.

“The Old Port of Montreal is a family location,” explains Duchesneau. “We want to use our location to make it a family hub, and an adrenaline hub.”

Another way Voiles en Voiles has embraced its location is by partnering with other Old Port businesses, including a zip line and quadricycle rentals, to offer visitors money-saving combination packages. 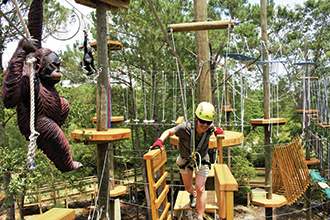 At Shallotte River Swamp Park in eastern North Carolina, the pristine swampland that encompasses much of the park is central to the guest experience and shapes the park’s attractions.

Opened in June 2015, the eco-friendly park features a zip line tour with 10 zips that travel over pristine swampland, and a 53-element challenge course open to adventurers as young as four years old. Guided swamp boat tours are also available.

The attractions are part of an experience centered on educating customers about the swamp. “We literally want to show people what it means to be in an eastern North Carolina swamp and all,” says general manager George Howard. “We want people to learn about the property.”

Howard stresses that guides play an integral part in telling the park’s natural story. “Our guides are what makes the experience,” he says. “We work hard to make sure our guides are well trained.”

In the future, the park may offer evening zip tours to take advantage of cooler temperatures. Though still in the planning stages, Howard is figuring out the story line for the tour, which could include costumed guides and have lanterns illuminating the route. “We are continuing to grow and learn,” says Howard. “We are figuring out how to tailor the property to this place and to the people who are here.” 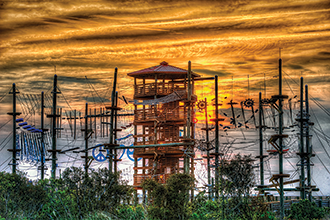 The Outer Banks of North Carolina are no stranger to stormy weather, so First Flight Adventure Park created an experience that gives a nod to extreme ocean weather.

A boardwalk over a grassy salt marsh on the edge of Albemarle Sound leads customers to First Flight Adventure Park in Nags Head, N.C. Located in the tourism-driven Outer Banks—a long string of islands and peninsulas—that is no stranger to the impact of stormy weather, owners Brad and Abby Carey have woven in a maritime theme on their course, which is shaped like the swirling hurricane symbol seen on meteorological maps.

Recognized in 2015 by the Association for Challenge Course Technology with its Outstanding Structure Design Award, the course utilizes weather terms like Tropical Storm and Category 5 to rate its challenges from easy to most difficult.

The Careys have an adventure pedigree. Before building the park, Brad spent 13 years building rope and obstacle courses for Challenge Design Innovations, while Abby led bicycle tours and worked in a bike shop. Both were Outer Banks vacationers in their youth, so the area was always on their radar. “We knew that if we found the right piece of property we could build a great course here,” remembers Abby.

It took about two years to get the town’s approval, secure funding, and find the right location, but the park opened before the summer swarm in 2014.

From the top of the course on the thin barrier island, the salt air from the ocean is ever-present. Soothing sunsets mark day’s end. Under the park, the flora and fauna is wild and mostly undisturbed.

“We want to provide a unique way to challenge families and groups of friends, while they can get a bird’s-eye view of the Outer Banks,” says Abby. “Our location is key to our course, especially in the hot summer months. When it’s super hot on the beach, we always have a nice breeze.”

Forging an identity based on location seems to resonate with guests. Captain Zipline, Cave of the Winds, Mega Caverns, Shallotte River, and First Flight all have been awarded Certificates of Excellence from Trip Advisor, while Voiles en Voiles garners a lion’s share of valuable excellent and very good visitor ratings on the trusted site.

Clearly, the overall experience contributes to those accolades, not just the location. But there is no question that embracing their environs is what makes each operation unique and successful. And educating guests about the location rounds out the experience for guests of all walks of life, says Howard. “Not everyone is a Ninja Warrior. There are rocking chair people, too. Both want to appreciate the ecosystem.”