Like many ski areas across the country, Vermont’s Killington Resort continues to invest in warm-weather activities to attract the four-season vacation crowd. At Killington, this means an expansive outdoor Adventure Center with a mountain coaster, high ropes course, Segway tours, a Euro Bungee, and more. Last summer, in the quest to provide another option for the younger set, the resort added an outdoor, open-top human maze to its offerings—and has seen a great (dare we say a-maze-ing?) return on investment. 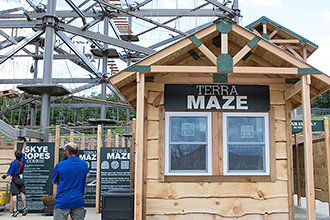 The entrance to Terra Maze where participants can maneuver through while family and friends take on the challenge above.

Killington’s Terra-Maze, a product of Colorado-based Amaze’n Mazes, is a configuration of 320 four-foot-high plastic panels arranged into pathways that spin out in every direction. Built directly underneath a four-story ropes course designed by Ropes Courses, Inc., the maze is a unique and fun addition to the existing park.

Upon sign-up, maze users get a Passport Card, which gets time-stamped at the beginning of their run. It’s a true race against the clock, and once inside the Terra-Maze, the goal is to reach four different checkpoints as fast as possible. Racers receive a passport stamp at each checkpoint (one letter at each, which spell the word MAZE), and once all four stamps are collected, they exit and clock out, recording their overall time.

Reaching the checkpoints requires users to navigate a variety of dead ends and wrong-way aisles, which resort retail director Rich McCoy says kids love. The challenge, he adds, is to shave minutes off your original time or to compete against the times of your companions. It’s a concept that encourages repeat visitation.

One of the nice things about the product, says McCoy, is that it’s totally changeable. “We can go in and move a few panels around and change the orientation of the maze.”

Like many ski area summer activities, the Terra-Maze is family-friendly. In fact, it was specifically added to cater to kids.

“A lot of Adventure Center products have height and weight restrictions, and younger kids feel left out,” says McCoy. “We had to bring in some items that smaller kids can do without parents needing to chaperone. Kids can go out on their own and be in there for 10 minutes, then want to immediately do it again.”

Parents aren’t totally left out. Stairs on the corners of the maze lead to a covered deck that allows them to see down into the maze. Of course, this doesn’t mean adults can’t participate, too.

McCoy says Killington staff decided to add the maze after testing it out at a ski industry conference in 2014. “When you first look at it, it looks ok. But once you do it, it’s pretty exciting,” says McCoy. “We got introduced to it and immediately tried it again to see if we could beat our time. We kept wanting to re-do it.”

McCoy says that with an Adventure Center pass, kids will run through the Terra-Maze 10 or 12 times in a day. He estimates that 60 percent of users are young children. “The kids are running through the maze and trying to beat their time and beat their friends’. It’s a very popular attraction with that demographic.”

Once kids come out of the maze, they receive small, amusement-park-style prizes based on their time.