You are at:Home»Park Briefs»Zip Line Incidents in Pa. and S.C. Provide Cautionary Tales
By Rick Kahl on August 19, 2021 Park Briefs

Two zip line incidents this spring and summer serve as a reminder that guest safety must remain top of mind on aerial trekking courses and zip lines. 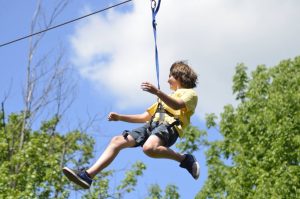 A child fell about 30 feet from a 1000-foot dual zip line at Camelback Resort on May 14 and was flown to Lehigh Valley Hospital. An investigation has been underway for more than two months, but no details have been released to date. In a prepared statement, Camelback said, “The resort is working closely with local authorities on an operational review.”

The Pennsylvania Department of Agriculture division of amusement rides and attractions has been investigating the incident, according to supervisor Joseph Filoromo. The zip line has been closed during the investigation, and remained closed in mid-August.

On July 24, a man who is reported to be an employee, was injured while zipping at Adventure Hilton Head, S.C., after colliding with a backhoe. According to several reports, rescue personnel found him sitting on a zip line tower, conscious and alert, but complaining of pain in his ribs and one of his legs. After examining his injuries, rescue personnel put him in a stokes basket with spine board and used a 35-foot extension ladder to lower him to the ground. He was taken to a hospital in Savannah, S.C., for evaluation and treatment.

According to its Facebook page, Adventure Hilton Head has eight zip lines, though its website currently says the tour includes only seven lines, along with two suspended sky bridges. The two-hour canopy tour is set among the park’s oaks and pines. A Facebook post says that the park has been building a go-kart track, but it is not known whether the backhoe was involved in that project.

As of mid-August, the tour appeared to be closed, and the go-kart track had not yet opened. The park’s aerial challenge course was operating, however.