Email publisher Olivia Rowan olivia@adventureparkinsider.com if you would like your adventure park considered for Park 360. Virginia is for (Adventure) Lovers.

When Kema Geroux and Wendy Tompkins imagined opening an adventure park on the grounds of Virginia Beach’s Virginia Aquarium, they had no idea they would one day operate one of the largest in the world. Both women could see the potential in the space—a seven-acre wooded parcel above existing ground-level pathways and adjacent to the Owl Creek estuary—but it would be several years before the property’s full potential was realized. 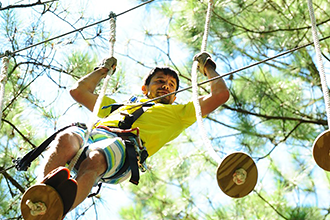 Our most challenging aerial trail, Commando, puts a climber’s strength and skills to the test. (Photo by Tim Curtis.)

After some preliminary due diligence, the two formed a partnership with Connecticut-based Outdoor Venture Group, which designs, builds, and operates aerial adventure parks. Through a competitive bidding process, the partnership was chosen as the Aquarium’s contracted adventure-park provider. The Adventure Park at Virginia Aquarium opened its doors in May 2014, on property leased from the Aquarium.

Outdoor Venture has designed 21 parks in North America and runs nine of them. OV president Bahman Azarm said the design process took a month, followed by three months of building. “Normally the design and construction phase would be shorter,” says Azarm, “but this particular park is among the five biggest in the world.”

As with all OV parks, the Adventure Park at Virginia Aquarium is a Swiss-style design, which uses a central platform where all courses start as opposed to a more traditional French design, where participants move from one course to the next.

“Some parks are set up like a golf course, moving from hole to hole systematically,” says Geroux. “The Swiss style is more like going to a ski hill, where multiple trails weave off in different directions and you choose which one you want to take.”

At the Aquarium, when a client finishes a trail, they return to the central platform and choose another course. The park is large, offering 241 elements on 13 aerial trails that all start from one main tree platform.