You are at:Home»Park Briefs»Shepherd of the Hills Repeats as USA Today’s “Best Aerial Park”
By Rick Kahl on August 20, 2020 Park Briefs 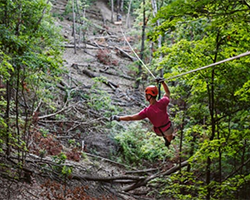 Shepherd of the Hills, in Branson, Mo., was voted Best Aerial Adventure Park for the second consecutive year in USA Today’s poll of its readers and travel industry leaders to determine top attractions across the country. The Gorge, Saluda, N.C., and Kerfoot Canopy Tour, Henderson, Minn., took second and third place honors, respectively.

Owners began to revive the historic Shepherd of the Hills site in 2017. The adventure park offers multi-level treetop ropes courses, zip line canopy tour, and the Vigilante Extreme ZipRider, on which riders reach speeds of up to 50 mph after a launch from 170 feet above ground. Among the newer attractions are night-time canopy tours and adventures on the ropes courses.

A panel of experts partnered with USA Today’s 10Best editors to pick the initial nominees, and the top 10 winners were determined by popular vote.