The Hocking Hills region of Southeast Ohio is among the state’s most scenic. Shear cliffs, deep gorges, and recessed caves dot the area, most formed by tough-as-nails Blackhand Sandstone—an erosion-resistant substance that lends itself to prominent natural structures. Two nature preserves, a state forest, and several state parks, including the 2,356-acre Hocking Hills State Park, are located here, and tourists in the form of birders, campers, hikers, and boaters fill hundreds of Hocking County rental cabins each summer. 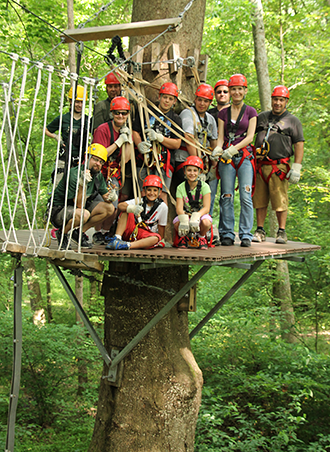 A group in waiting.

It’s not surprising then, that Ohio’s first treetop canopy tour opened in 2008 among the area’s resident maples and oaks. Hocking Hills Canopy Tours operates in the small town of Rockbridge, named after a 100-foot natural sandstone bridge that stretches over one of many local ravines.

At the time, the park’s six owners had zero professional experience with adventure parks or the tourism industry. All had been tourists, and some had ridden a zip line—in Alaska, in 2007—and liked it. So much so that within months after that trip, they’d purchased land near Hocking Hills and enlisted Colorado-based Bonsai Design to consult on, and eventually build, the park’s first feature. The Zip Line Canopy Tour opened to the public eight months after the initial site visit. Owner Julieann Burroughs says it was the first true canopy zip tour in the Midwest.

Burroughs says that opening the park on the heels of the 2008 stock market crash could have backfired. Instead, it worked in the group’s favor. “Fortunately for us, it worked out well,” she says, “because no one was travelling far, they were doing day trips or weekend trips.

Since then, the park has blossomed, garnering top reviews as a number-one regional attraction. The six—Burroughs along with sister, Jodi Burroughs, Jodi’s husband Ray Smolinski, Dan Eckel, and Larry and Joyce Gerstner—continue to own and operate it, with help from four year-round managers and 80 employees at the height of season. Staff trainers and the park building crew are now in house. 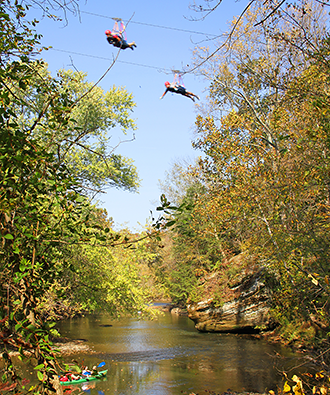 Riders whizz over the Hocking River several times on the SuperZip Tour.

The owners subscribe to a smart growth philosophy, and Burroughs says their goal has always been to add one feature each year. After the success of the Canopy Tour, and in answer to myriad “further, faster, higher” requests, the SuperZip was built in 2010. The quarter-mile SuperZip, also a canopy tour, reaches speeds of up to 50 MPH and incorporates a series of elevated walkways, tree platforms, and an 85-foot tower.

Next came the 43-acre X Tour, a hybrid offering that incorporates trees as well as towers, and highlights the best of the surrounding scenery, including the Hocking River. At one point riders zip into a recessed cave, come to a ground landing, and walk to their next line. 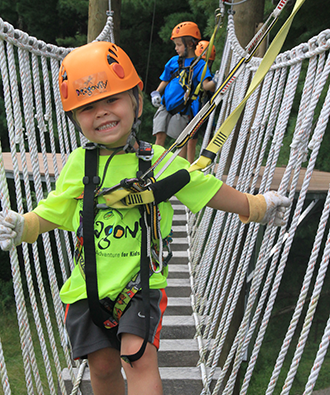 The Dragonfly Tour for kids was built in 2012. Kids are able to ride eight zip lines, three fun bridges, and a sky tunnel solo while their parents walk below.

In answer to the age-old question, “What do you have for kids?” the DragonFly Zipline Adventure was incorporated in 2012. The DragonFly targets kids between 5 and 12, who can safely ride the eight zips solo on a continuous belay system, with the highest point a 25-foot sky bridge. Parents can follow, encourage, and snap photos from a designated ground path below. The DragonFly has seen steady growth every year, says Burroughs.

On weekend nights for four weeks during the summer, the park also offers guided nighttime “Moonshine Rides” on its Canopy course. Users are given a headlamp and glow stick for the half-tour that’s about half the cost.