You are at:Home»Articles»Staying Connected
By Peter Oliver on June 14, 2022 Summer 2022

It might be overly dramatic to say that an adventure-park visitor’s life is on the line, but it is, literally, true. Park safety is often dependent on visitors being securely attached to a lifeline. Falls might be uncommon and injurious falls rare, but no park would operate without a safety assuring system. Indeed, no insurance provider or safety inspector would allow it to happen. Belay systems also allow course designers to include challenges that would be unthinkable without participants being safely attached to a lifeline. There are myriad belay configurations to choose from, and as the adventure park industry matures, belay systems continue to be refined.

A park belay system basically consists of four components—a lifeline (or zip line), a harness worn by the participant, and the paired harness-and-lifeline-connecting components—a lanyard and some device—known variously as a carabiner, connector, or hook—to connect the lanyard to the lifeline.

Much adventure-park hardware, of course, is descended from alpinist gear. In the case of belay systems, the carabiners and ropes used in rock climbing and mountaineering have been adapted or reimagined for the unique demands of park use. The resulting lineup of belay possibilities is three-tiered: basic carabiner-cum-lanyard lobster claw setups, smart belay systems, and continuous belay systems. The choice is determined by a park’s complexity, the composition of its clientele, throughput goals, and, of course, its budget. Here’s a look at the pros and cons of each system.

Advantages. Perhaps the biggest advantage to lobster claw/carabiner-lanyard systems is the smaller price tag. These systems can typically be installed at pennies on the dollar when compared to a smart belay or continuous belay system. Carabiners in these systems typically incorporate features that allow for easy locking and unlocking yet protect against unintentional opening. “If you’re not a complex operation, you can get by with a more economical system,” says Ben Eaton of Petzl.

Petzl makes a couple of lanyard-carabiner combinations that are specifically suitable for park use. Its Joko lanyard is made of what Eaton calls “dynamic climbing rope,” featuring extra stretch, and can be either adjustable or customizable—that is, a park can order lanyards of custom length and color. The Joko lanyard can be used with either Petzl’s Vertigo Wire-Lock Park carabiner (also designed to interface with Petzl’s Trac trolley) or the Am’D Pin-Lock carabiner, which stays locked until a park guide opens it with a pin.

Kong also produces carabiners and belays specifically designed for adventure parks, including the Ovalone carabiner series and Aro Adventure Evo single and double lanyards; the lanyards can also be used with Kong’s CouDou Pro continuous belay system. According to Kong USA’s Kenny Brodin, durability is one of the CouDou Pro CS Evo’s main selling points; of the 150,000 CS Evos in use, says Brodin, not a single one has had to be replaced for wear. 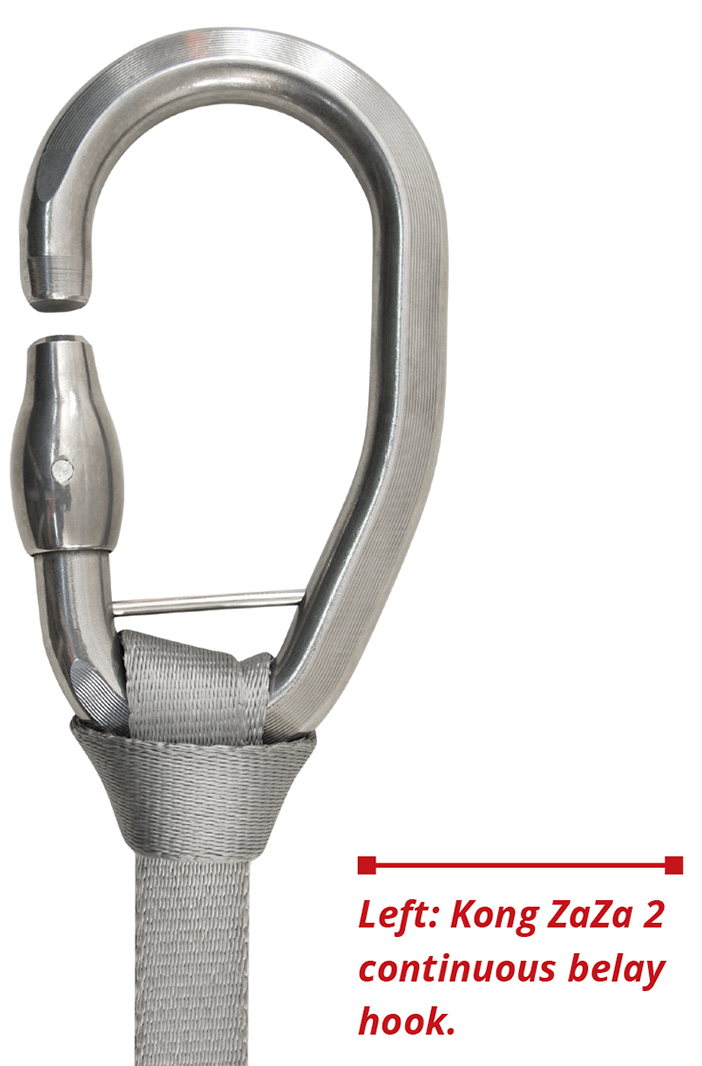 Aerial Adventure Tech, a distributor of various brands of adventure-park equipment, makes its own EZ Adjust Y lanyard for traditional ropes courses, challenge courses, and static belay systems. The lanyard, made of braided rope, comes with lobster claws and a sliding-hitch adjustment mechanism that allows the user to change the length of the lanyard while in use.

The lanyard might work well on relatively basic course designs, but according to Alex Cox of Aerial Adventure Tech, which is also a course builder and designer, the company uses a LockD smart-belay system (at right) on its new builds.

Drawbacks. One of the main drawbacks of a traditional lobster-claw carabiner-lanyard belay system on a course with multiple transfer points is the need for park staff to monitor participants and how they detach and reattach their belays. There is always the possibility that participants will detach both carabiners at the same time, exposing them to the risk of a fall. While the system might save money in hardware costs, savings can be gobbled up by the cost of additional monitors.

Advantages. Smart-belay systems, typically a Y lanyard design with carabiner-like connectors to attach to the lifeline, have at least two major advantages, according to manufacturers’ reps. First is greater security compared to lobster claws. With smart belays, one carabiner/connector automatically locks when the other opens, so a participant is always secured to the lifeline. Second, because participants manipulate the connectors in the locking and unlocking process, they remain more actively involved than with a continuous belay (this is true with lobster claws as well), making for a better adventure experience, according to the suppliers.

Another advantage is that most existing lobster claw systems can be retrofitted with a smart belay setup without significant modification.

LockD, made by Ropes Park Equipment, replaced the Bornack SSB a couple of years ago, and came with several improvements. Most important, it was mechanically much simpler, consisting of 30 parts compared with the SSB’s more than 60. That made the units lighter and thus easier for participants to use and carry. LockD clips also require far less maintenance than its predecessor. Rather than sending them to a maintenance center for regular inspection or repair, LockD clips can be inspected and repaired on site, according to RPE’s Bahman Azarm. The result is a significant reduction in maintenance costs. 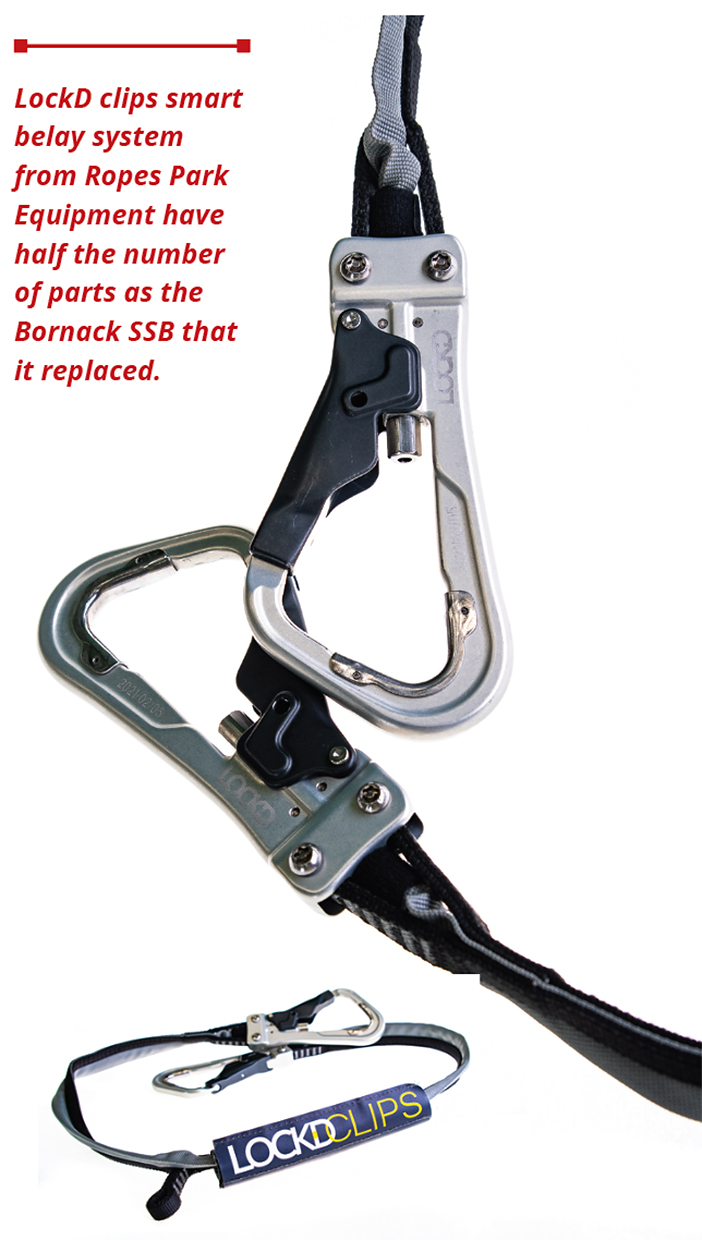 Azarm estimates that roughly 50 percent of the parks in North America equipped with SSB clips have now made the switch to LockD clips. The reduction in maintenance costs alone, says Azarm, “makes the ROI fairly easy to justify.” For the time being, SSB replacement parts are still available, but eventually, operators will have to switch to LockD clips or adopt an entirely different belay system.

CliC-iT recently added a CliC’N’ZiP variation to its Adventure smart-belay design, featuring a built-in pulley to allow for seamless integration between short zip lines and other ropes course features. “Because it is relatively new, there is still not a big demand,” says CliC-iT’s Kyle Bruser, but he expects CliC’N’ZiP to gain momentum as market awareness grows. The CliC-iT designs also offer the ease of inspection and maintenance on site. 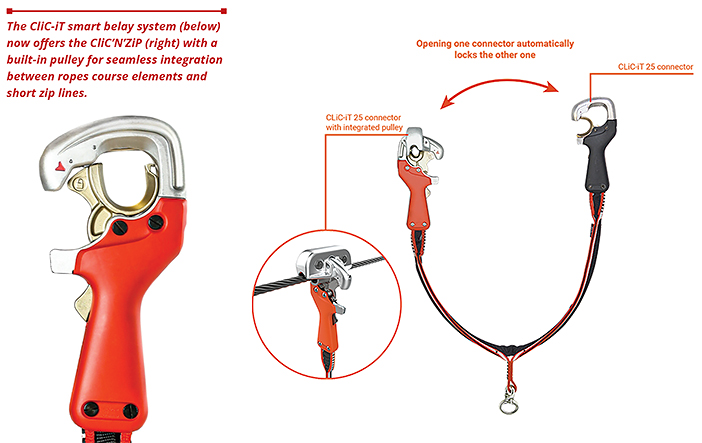 In case of a fall, the stretchability of the Adventure’s lanyard allows for ample shock absorption, says Bruser. Lanyards come in three lengths—110 cm, 130 cm, and 150 cm.

Edelrid. Pulleys are also built into Edelrid’s Smart Belay X clips, a product launched in 2021, to allow the clips to be used on zip lines, according to Edelrid’s Blair Williams. Further, in this revision of Edelrid’s original Smart Belay, the locking system is now controlled not by pressure but by magnets, activated by the steel lifeline, and hence “cannot be overridden by manipulation with your fingers,” says Williams, resulting in increased security of the attachment.

The recently updated Smart Belay X from Edelrid has a magnetized locking system.

Regular maintenance—one of the historical bugaboos of smart belay systems—is now less cumbersome and costly for the Smart Belay X. Routine inspections and repairs can be made by the operator (with appropriate training). According to Williams, the units now require a full inspection on a three-year, not annual, basis.

ISC offers a unique take on the smart belay concept in its Smart Snap system, a connector unit that is effectively two carabiners, back to back, on a single lanyard. At the junction of course segments, the participant uses a key or pin to unlock and lock the carabiner gates in making a fully secured transition to the next part of a course.

Drawbacks. The systems can be costly, usually running in the neighborhood of $500 per unit. To offset that, smart-belay suppliers say that, because the clips (or claws or carabiners—pick a term, any term) are manipulated by the user, and because the design effectively eliminates “the human error factor,” as Azarm puts it, the need for on-course staff is significantly reduced, offsetting the upfront expense. Maintenance costs have been an issue in the past, but several manufacturers have simplified the process and reduced the cost as well.

Advantages. Continuous belay systems require no manipulation from guests, making them easier for guests to use, and often allow for the highest throughput.

They are simpler, in both concept and technology. That means, among other things, that maintenance is also simple. (One company says its continuous belay hook requires “no maintenance.”) With only a single lanyard and carabiner/connector (typically “hook” in continuous-belay terminology), they are fairly simple for users to move along the lifeline. Finally, they are typically much lighter than lobster-claw and smart-belay lanyard-and-connector combos.

The basic design of the hook includes an opening, where a normal carabiner gate might be, that is narrower than the diameter of the lifeline, preventing the hook from coming off the lifeline. The width of the gap matches the width of plates or swivels at junction points in a course, allowing the hook to slide across the plate to the lifeline for the next course segment.

Coudou. The centerpiece of Kong’s Coudou continuous belay system is its ZaZa 2 hook that very much resembles a traditional carabiner. The hook can be coupled with a single lanyard, such as Kong’s Aro Adventure Evo (available in four lengths between 50 and 80 cm, although Kong’s Brodin says that 70 cm is the most common length). For zip lines, the hook simply rests in a notch on the top of a Kong trolley. In case of emergency evacuation, the hook has a small gate on one end of the opening; for security, the gate can be released only by a guide with a special pin.

Vertical Trek’s continuous belay system features three variations on its Ocho hook: the Ocho, Ocho +, and Ocho Max. The hooks have been refined through the process of design and development for 15 years, according to a Vertical Trek representative. Like the ZaZa 2, there is a narrow opening where a carabiner gate might normally be, allowing the hook to slide over junction plates, with small swivel gates at each end of the opening for emergency evac. The Ocho design also incorporates a replaceable plate at the inner top of the hook; this allows for sliding on zip lines, with wear limited to the plate and not the rest of the hook. 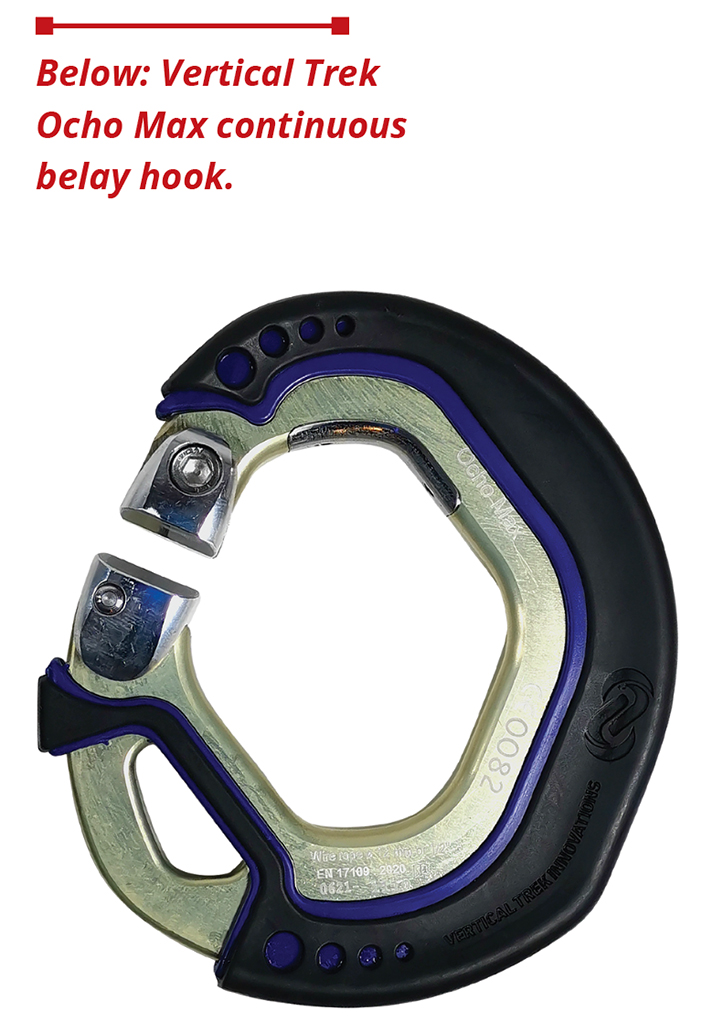 Kanopeo offers two different continuous belay systems: Speedrunner and Saferoller. Speedrunner is a hook and lanyard connection system using the new Kanhook Ultimate hook and Speedrunner Laynard. The Kanhook Ultimate utilizes a spring-loaded safety latch, which only opens when it contacts a bracket at an obstacle, just enough to pass by while remaining constantly attached to the lifeline. The Speedrunner Lanyard, made from semi-static 9.5-mm rope, is designed specifically for use with the Kanhook.

The Saferoller is unique in that it’s a trolley, not a hook. The trolley rides atop the lifeline and is connected to the participant’s lanyard by a new Dyneema/nylon-blend strap that rotates 360 degrees for ease of movement.

Drawbacks. Among potential drawbacks to a continuous belay system is retrofitting an existing layout. Vertical Trek insists that retrofits are “quick and easy,” though it requires installation of plates and other hardware at course intersections, and possibly the replacement of existing lifelines.

The passivity of the system—which is a selling point for some operators—might also be a drawback for others who favor the active engagement of participants in the belay process. And while passing a slower traveler on course is possible (achieved in the Coudou system, for example, by passing the lanyard of the overtaking traveler through the gap in the hook of the lead person, followed by one hook passing completely through the other), participants might find it more awkward than the relatively simple clipping and unclipping involved with a smart belay system.

There have been a lot of developments, especially in smart belays, as manufacturers have continued to refine their products for improved security of participants and ease of use, as well as reduced maintenance costs for operators. That gives operators more choices with which to fine-tune their operations and deliver the desired guest experience.