The ANSI/ACCT Draft Standards released in late November contain changes to some key aspects of the aerial adventure business, primarily to zip line braking, ground anchors, critical ropes (including lanyards), and operating systems. While the final standards could well incorporate revisions from the draft—which was open for public comment from Nov. 25, 2022, to Jan. 9, 2023—the changes will have some degree of impact on designers, installers, inspectors, trainers, and operators.

To explore what those impacts might be, Adventure Park Insider assembled a roundtable drawn from across the industry. While several of the panelists were involved in developing the draft or shepherding it through the standards process, they also spoke from their perspective as members of their own companies. There was general agreement that there is room to improve upon the draft as it moves through the development process. Here’s what the panel had to say. 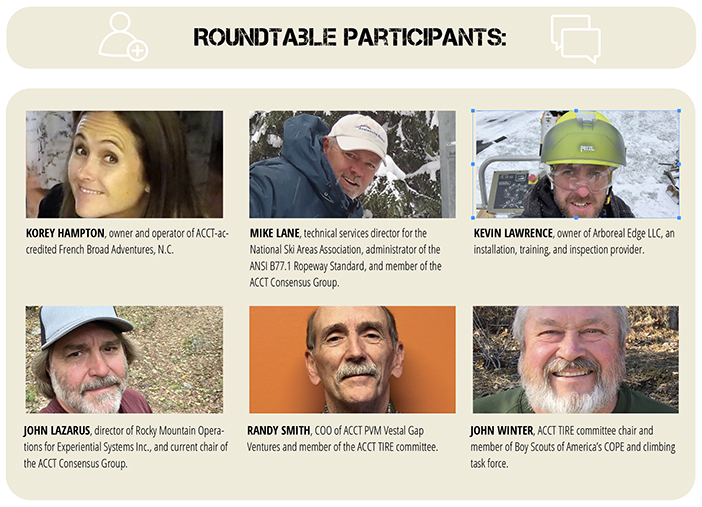 John Winter: Most of it came from a couple of TIRE [ACCT Technical Information, Research, and Education Committee] task forces that were commissioned by [TIRE members] Rich Klajnscek and Kathy Haras specifically on zip line braking and ground anchors.

There was a lot of discussion around modes of braking and requirements, and there were some ambiguities that we wanted to address. Eventually we landed on [language]that states, “due to the inability of staff to physically intervene with participant actions when a participant is on the zip line, the zip line system shall not depend on participant actions to provide the primary brake.”

Given the clientele that you’re likely going to have and the variance in ability to understand what they’re doing and take on that responsibility, it was strongly felt that that language needs to be put in there.

Mike Lane: When Kathy and Rich came up with some of the figures in terms of the speeds [and collision impacts on the human body], it was based on pretty good data from the parking lot industry. And the speed ranges align with what some provinces in Canada are doing. It’s also similar to what ASTM F24 [whose subcommittee F2959 writes standards for aerial adventure activities]has been looking at.

Some of this is still in the works. We have to truly understand what happens to an incapacitated passenger and/or incapacitated guide in the arrival zone.

API: Was there exploration of any other ways of regulating hand braking and mitigating risk aside from the speed range idea?

John Lazarus: One of the issues that comes up around speed is: how much energy can the body absorb when it comes into an object? I’m not sure how else to come about trying to assess braking other than the mechanics of mass and speed.

Lane: What we’re seeing on many zip lines is nothing is getting tested to the extremes of the speeds that are possible. When we’ve done those tests, we’ve seen things that were far beyond what the design was made for. That’s something we all have to pay attention to. 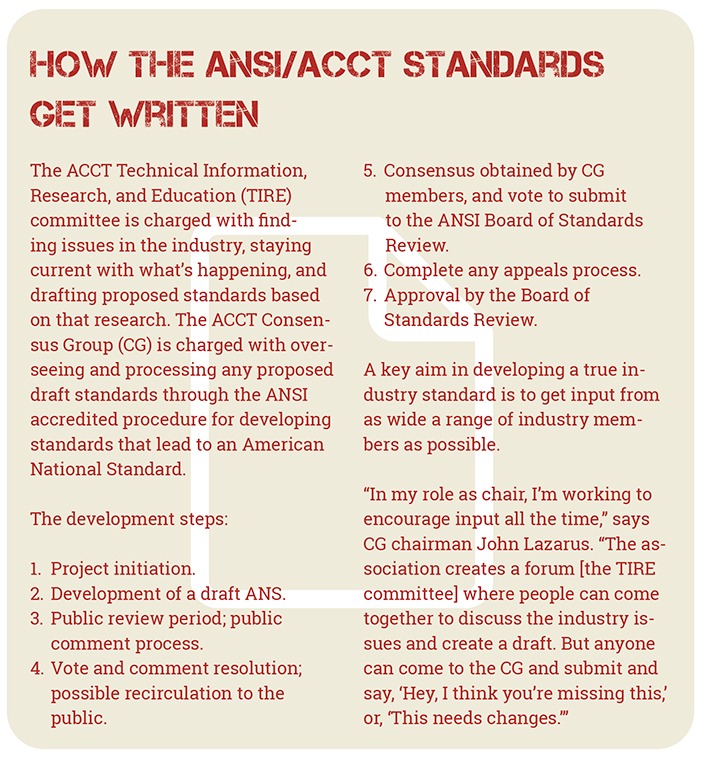 API: How will the hand braking changes affect operators and inspectors?

Randy Smith: I feel like these standards give me a leg to stand on. I can say, “Look, the standards say this, and what you’ve got is that, and we’ve got to somehow get that corrected.”

I’m not saying that the way the standard’s written is perfect. I’m hoping we get more input, and that maybe it gets massaged some. But I want there to be better guidelines than there are today.

Lazarus: Speed testing adds a burden to the inspectors, because now we’re required to do much more analysis. You’re expanding the scope of the inspector’s responsibilities and their expertise in being able to do analysis in those things, too.

API: How do inspectors and/or builders verify that speeds will be in the 6- to 15-mph range—as the draft standards suggest—or not?

Smith: It’s hard to judge, especially the slower speeds, but again, I think it can be done.

I think some of the designs that have emerged in recent years may just have to disappear. They just may not be viable within the current realm of braking.

API: The draft standards for guy wires and anchor systems call for a lot more testing of “critical” components. It also defines both critical and non-critical wires/anchors, and “built” and “installed” anchors. How would these changes affect builders and inspectors—and eventually, owners/operators?

Lazarus: Primarily, the anchor standard is kind of a research project to see how professional anchors are installed and to what criteria. … A lot of this material can be found in other publications, other standards, documents. We’re just pulling it into our standards to make builders and designers aware of it.

The burden will fall on the designer when they start designing the course, and on the installer who puts it in. The challenging piece, as always, is how to deal with an as-built design and the burden that might place on the owner/operator to now have to accept that validation. The operator will have to get those tests done if the anchors were installed several years ago and nobody did those tests.

Smith: In general, if you’ve been treating critical anchors as critical, you probably have already been doing most of these things. But there’s a little more information about evaluating the geotechnical specs before you install anchors, which makes a lot of sense. And there is some required post-installation testing that was probably not there before. The requirement to retest installed ground anchors annually will definitely add a bit to the inspection process.

Kevin Lawrence: We’ve been doing geotech for a long time anyway. The client reaction to the additional cost of a geotech survey isn’t always a good one, but I sleep better at night knowing exactly how much that anchor will hold and then I can test it to that. Then the only thing that we can’t control is any changing soil conditions. So, I don’t think it’s a bad thing to retest the soil condition. But again, there’s a cost.

Lazarus: Probably the biggest challenge in this as an inspector is using rock anchors that weren’t proof tested, because rock can be a very unstable medium. That creates a significant problem for the inspector trying to say whether or not it’s going to fail.

ASTM just came out with a proposal for a rock anchor standard [in regard to via ferratas]. We’re all starting to blend together in the same industry, and we are expected to harmonize with other standards. So that is something we have to take a look at, and that may end up affecting how this standard ultimately gets written. 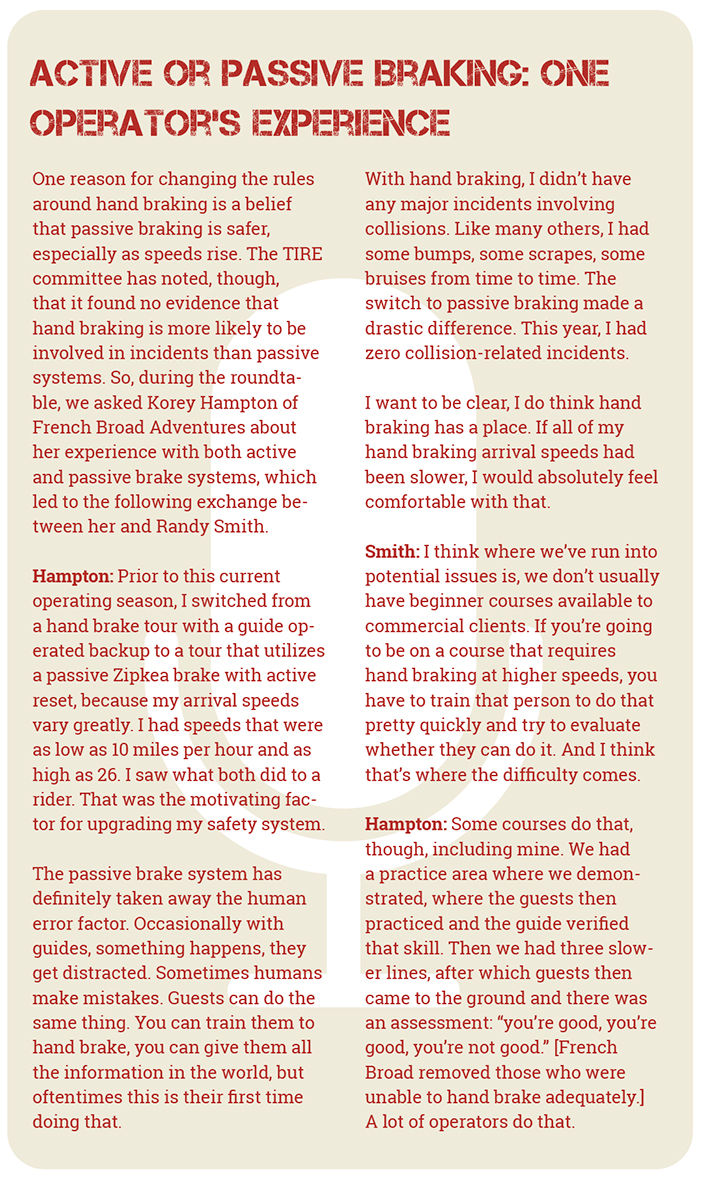 API: In the draft standards, “lifelines” are now referred to as “critical ropes.” What issues were addressed—what was changed?

Smith: The task force spent most of its time researching non-standard rope systems, in particular the synthetic rope systems that are emerging. That technology is changing by the day, and there’s a tendency to take some of these synthetic rope systems and apply them to different uses in our industry. And unless you know how that rope is going to perform over time—how it’s to be tested, and what criteria you would use to retire it—you better not use it. Know what you’re working with, and have evaluative criteria, performance criteria, before you delve into it. That’s one of the warnings that’s interwoven into that section.

API: Does the standard directly or indirectly address the use of Hubbell deadends, which were a sore spot a few years ago?

Lazarus: The standard wouldn’t be the place to evaluate specific manufacturers or brand names. But we’ve addressed the characteristics of an appropriate termination and that includes the manufacturer’s approval for use.

A good standard is written in a way to give people performance data, and then they get to go and invent the thing that will do that, and then they do their testing and produce things, and then it becomes a product that can be sold and used out in the field.

Smith: I don’t think we actually changed criteria, per se, on lanyards. I don’t think people will have to buy new stuff because of the standard. We tried to clean up the standard and make it a little easier to use.

The whole industry has gotten so much more complex in the last 10 years. If you look at operating systems, one of the needs was to put a name on each, so we could all have a common language and talk about it. And again, that ripples through the whole standard for consistency. It’s really just a language realignment.

Will an operator need to make those language changes in their manual? I don’t think they do. You can internally call it anything you want.

Winter: Yes, but the new standards make the terminology consistent with a lot of authorities-having-jurisdiction documents, like OSHA, where the focus is now on a maximum allowable impact force on the body, maximum allowable free fall distance. We weren’t organized in that fashion before. So, I think it makes it easier for an operator to make their documentation more compatible so that if they did have an OSHA audit, for instance, it’d be consistent.

Lawrence: Same with some of the state agencies. I think it’s beneficial to have the same verbiage across the board.

Korey Hampton: Most operators don’t even know that they’re able to comment on the standards. From my understanding, oftentimes the number of people that comment is pretty limited.

Encourage readers to actually read the draft standards. Encourage them to ask their vendors questions about what it all means, what the implications are, what they will need to do to become compliant.