More than 1,100 members of the challenge course and adventure park industry gathered in Raleigh, N.C., for the 30th Annual Association for Challenge Course Technology (ACCT) Conference, Feb. 5-9. The event revealed rising concerns over the state of insurance rates and the slowing growth in attendance at both traditional and recreational operations, juxtaposed against expansions and the rise of new parks and courses, with builders touting plenty of new projects.

The opening Tech Talks looked to a future in which interest in aerial adventure remains strong; experiential learning has great value and relevance; participation in ethnic communities broadens the industry and personal horizons; and mixed-reality technology enhances the aerial experience—sooner than one might imagine and in ways still being explored.

The 120-plus workshops and seminars spanned the usual range, from facilitation concepts and techniques to tree health and tips for operating adventure parks. The trade show presented several new products, as well as the evolution of many others.

The buzz in the hall focused on the rapidly changing insurance landscape and, at least among PVMs, on the new Alliance Collaborative, which sprang into existence just a few days before the ACCT Conference opened.

Attendees flocked to the exhibit hall for conversations with supplier partners like The Flybook’s Casey Dixon.

Josh Tod, left, and Erik Marter loosen up before taking the mic at the ACCT Olympics.

Many sessions were standing-room-only.

At the ACCT annual meeting, the association’s Professional Vendor Members chose three persons for the board of directors. Carson Rivers of Challenge Towers was voted back onto the board for a three-year term, and was subsequently elected chair of the board. Keith Jacobs of Experiential Systems was also elected for a three-year term and was voted vice-chair. Billy Simpson was elected to fill a one-year term for the seat previously held by current ACCT policy director Scott Andrews.

What Can Operators Do Differently To Achieve Growth?

The Adventure Park Insider State of the Industry Report launched four years ago. Since then, the visitation change year-over-year for responding operations has been relatively flat. While some operations have reported as much as a 30 percent increase in visitation, others have reported an equally significant decrease.

This is not a dire warning for the industry, though. The industry has continued to grow and, while the dramatic growth of the past 10 years has slowed, new operations continue to open, while others have reached and are maintaining numbers close to max capacity.

When we compare those visit trends to the projected visitation, though, there is an obvious discrepancy. In all four years of this survey, operators have, on average, anticipated double-digit growth in visitation for the coming year. Operators have tempered their expectations in more recent surveys, but respondents still anticipated (prior to the arrival of the coronavirus) an average year-over-year increase of 10 percent in 2020. 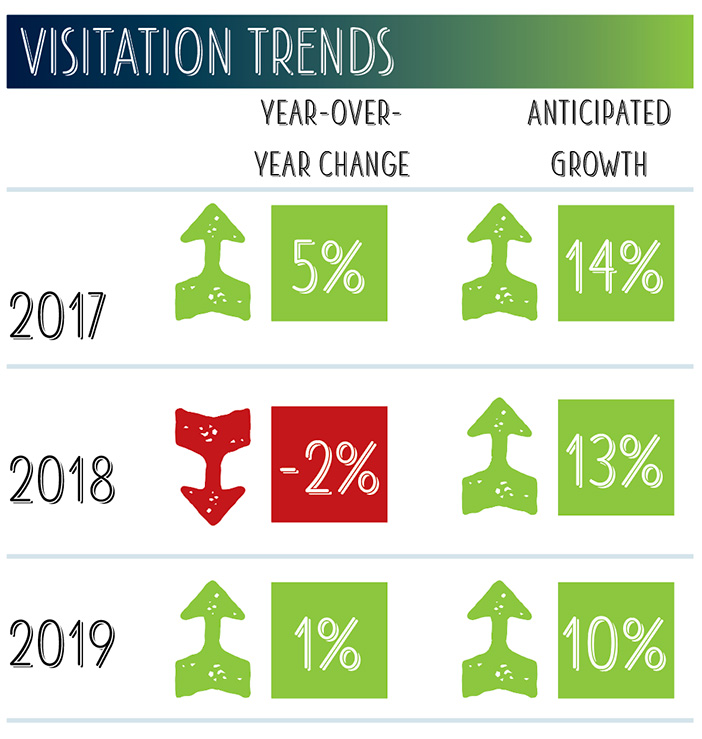 To attract new and return visitors, operators continue to focus on diversifying their offerings and reaching a broader audience. Even so, recent history suggests these efforts are unlikely to produce the levels of growth many respondents expect. To achieve ambitious visitation increases, the trends would indicate the need to do something different. Operators may need to look outside the industry and/or survey guests more precisely to unlock the secrets to renewed growth.

What, exactly, will look different for each operation depends on a variety of factors. However, operators are encouraged to look at other similar businesses and other sectors of the industry for ideas. According to research by Phocuswright, the tours and activities sector of the travel industry is the third-largest after flights and accommodations, and was forecasted, pre-COVID-19, to reach as high as $183 billion in market size in 2020. This would indicate that there are a lot of successful models out there to explore.

Additionally, operations are encouraged to expand post-visit surveys to include questions on how the overall experience could be improved through the addition or modification of activities or amenities, guest service, or even something more out-of-the-box.

The 2020 State of the Industry Report is now available for purchase. Learn more at www.adventureparkinsider.com/state-of-the-industry-report.

The Alliance Aims For a Revolution

The Alliance Collaborative, a new nonprofit launched in February, intends to revolutionize the challenge course industry. How? By helping vendors, builders, and other members streamline business operations, develop shared resources, and leverage buying power that will bring cost savings and better efficiencies.

While the primary candidates for membership are vendors, suppliers, and builders, the Alliance is open to all interested parties. The group launched a survey in early March to discover the range of services, and the different levels of membership, that industry participants would find attractive.

“Our goal is to use things like a group purchasing program, standardized documents and forms, and professional development workshops to improve operations at all of our member companies,” said Alliance general manager Bill Weaver.

In its survey, the Alliance asked about the types of certifications and training that prospective members might value. That sounds vaguely overlapping with some ACCT programs, but Weaver denies that. “It will either be unique and different training, or we won’t offer it,” he said. “If there are certifications that are available that our vendors want—for heavy equipment operators, for instance—that’s where we’ll focus our energy.”

“We are very committed to seeing ACCT flourish and grow. We are just one more voice in the room to help our industry be the best it can be,” he said.

An example of another potential benefit: Prior to formation of the Alliance, the founding members created a means to share employees. That included crafting a list of minimum training requirements. When one company needed an extra hand (or four) on a project, those employees could be loaned by other members and either hired as part-time employees, or the work was subcontracted between two entities.

Already, the Collaborative has put “a lot of time and energy” into developing a resource library, with access to templates and documents for inhouse inspections, vendor inspection reports, and contracts, Weaver said. That process is ongoing.

Another aim of the survey was to clarify membership levels and the dues structure. Once the package of benefits is settled, and the survey suggests the level of interest in different types of memberships, the group will set prices for dues.

Operation accreditation, which has been in development for several years now, is oh-so-close to becoming a reality. At press time, it was undergoing a final legal review before receiving a final look from the ACCT board of directors. ACCT executive director Shawn Tierney hoped it would be possible to launch the program on or about May 1, coronavirus permitting.

“We have a landing page on the website and lots of documents prepared already. There’s good support for the program, and we have a lot of the details ironed out,” Tierney said.

At the same time, he noted that five or six operators have expressed interest in applying for the program, and predicted that there could be as many as 15 to 20 who apply for the program. It’s possible that “a handful” of those will gain accreditation this year.

“Hopefully, we can double that number of applications in year two,” he added. “It will come down to cost, in the end.”

At the ACCT Conference in Raleigh, N.C., in early February, one of the Pre-Conference seminars focused on explaining ASTM and its F24 Committee, including the F2959 Task Group that develops standards for aerial adventures. A good portion of that session was spent on explaining the “standards harmonization process,” which ACCT, ASTM, and PRCA launched more than a year ago.

Session co-leader Jeff Borba of Precisioneering, who has played a prominent role in the F2959 Task Group, noted that “lots of folks are curious about the harmonization process,” and observed, “Several suppliers are here to understand how it will affect them going forward.”

Co-presenter Jamie Barrow, director of operations training and risk management for Vail Resorts’ summer programs and also a member of the F2959 Task Group, noted that the harmonization group first looked for instances of different requirements within the standards. There are just five such differences between the ACCT and ASTM standards, and most are relatively minor.

The second goal was to pinpoint areas “not addressed in the other standard,” Barrow said. He acknowledged that such instances will not necessarily be added to one or the other standard, as some stem from philosophical differences between the standards. He summarized those philosophical differences by saying, “ASTM is about removing or eliminating risk; ACCT is about controlling risk.”

In addition, Barrow noted that the ACCT standard is narrower and more specific in some instances, such as ride analysis, since it was developed specifically for aerial adventures, and not developed from ASTM’s broader F24 Committee on Amusement Rides and Devices. “There are advantages and disadvantages to each,” he said.

“But we agree we can work together and make each one better,” he noted. ASTM now asks ACCT to review proposed changes to the ASTM F2959 standards, and ACCT asks the same of ASTM for its ANSI/ACCT 03-2019 standards. The two organizations are gaining representation on one another’s review boards.

“In the end, you have to find the right balance of risk and mitigation,” he concluded.  —Rick Kahl