A century ago, the jungle gym introduced multiple choice to playground fun. It wasn’t just child’s play, though—it presented a multifaceted physical and mental challenge. As it morphed through the 20th century, swings, ropes, slides, climbing hand holds, and various structural configurations were added and attracted new participants. Jungle gym components were incorporated by the military in basic-training courses; ninja courses are among the latest variants.

RYZE Adventure Park, which opened this past September outside St. Louis, represents the latest incarnation of the jungle gym. The centerpiece of the park is an 18-pole, four-level KristallTurm structure with more than 100 different challenge elements. Some elements are easy enough for a four-year-old to negotiate, some are so demanding that even athletic adults might be overmatched. The idea, reaching back to the original jungle gym concept, was to allow and encourage participants to test their physical and mental limits.

“Challenge by choice” is the operative concept, according to Mark Da Costa, CEO of Aerial Attractions, which designed and built the RYZE structure. At various levels and junctions, participants are presented with choices—say, a bridge, a swing, and a zip line—of varying difficulties, and proceed in the direction that their inclination and physical ability dictate.

“We want people to be able to climb with confidence,” RYZE partner Greg Hoffmann told Terrain, a local magazine. “If they can overcome their fears here, then they can use that to accomplish other things in their lives.”

Hoffmann and RYZE managing partner Tony Holt teamed in conceiving the new park after the two had collaborated in operating an indoor family entertainment center in the St. Louis area. When visiting the International Association of Amusement Parks and Attractions (IAAPA) show in Europe in 2016, they saw a KristallTurm structure—basically a massive modern jungle gym in a star shape—and became inspired to move in that direction.

Opting for outdoors. At first, Hoffmann and Holt considered bringing the concept to an indoor space, but soon decid – ed that something outdoors made more sense. For that, they purchased a four-plus-acre plot in suburban Maryland Heights, Mo. It sits in an ideal, highly visible location near the intersection of Interstates 70 and 270.

Holt says that the RYZE park is pretty much the only game in town. There is another smaller, comparable indoor facility in the greater St. Louis area, says Holt, but nothing outdoors.

To make sure they got all the site elements right, the duo enlisted the design and construction expertise of Aerial At – tractions, which plotted out a structure that features, among other elements, zip lines, bridges, swings, climbs, balance challenges, a boulder crossing, a free fall, and even a bicycle on a beam.

Implementing challenge by choice. The choice-of-challenge concept required, in some instances, a mix-and-match ap – proach. For example, because the first level of the RYZE tower is geared toward four- to seven-year-olds, it was equipped with a kid-friendly continuous belay system. At upper levels, aimed at adults seeking a higher challenge level, a CliC-iT smart belay system was the way to go. Because various junction points presented challenges of varying difficulty, a color-coding system, similar to the system used for grading ski-trail difficulty, was put in play for guidance.

With more than 100 challenge elements within a fairly com – pact structure (the tower covers about a quarter of an acre), RYZE might seem to be courting a traffic jam during busy periods. But Holt insists that inherent in the design—basi – cally 50 triangles, each presenting three or four challenge choices—is a traffic-flow pattern that spreads people out. As a result, the course can comfortably handle more than 100 people at a time, Holt says. 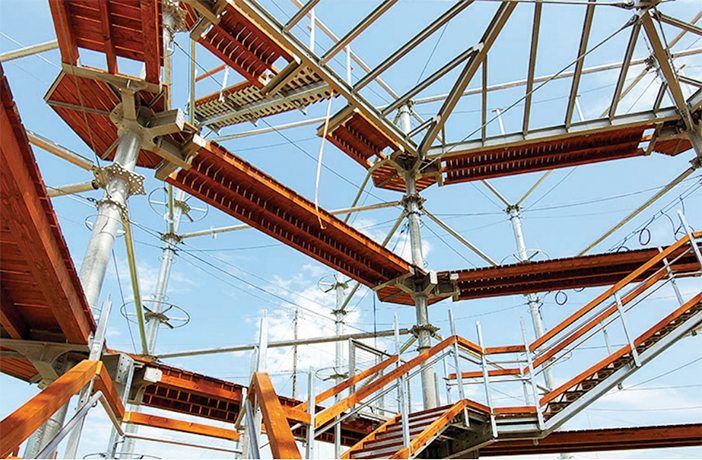 The RYZE climbing structure offers several different levels of challenge, allowing participants to create their own
path at juncture points. 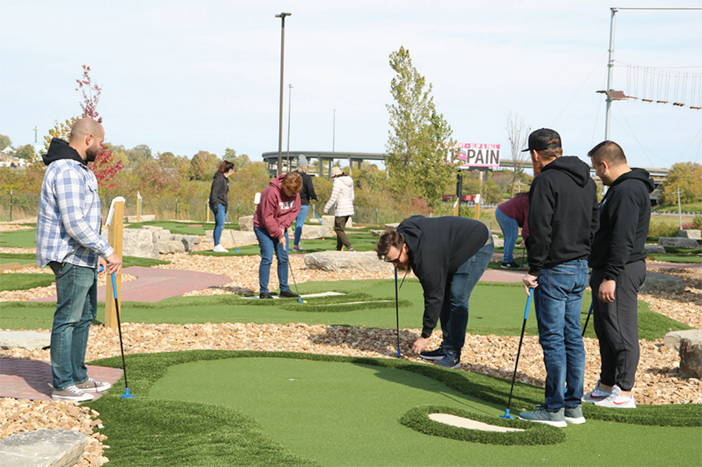 Mini golf has not only proven to be a great revenue source for RYZE, but it also serves as a gateway to the climbing structure for a less than adventurous local community.

Well-rounded offerings. The challenge structure is, of course, the centerpiece of RYZE, but it is not the park’s only revenue source. Mini golf is another. This had been “one of the strongest activities” at the indoor family center, according to Holt, and it provides an “easy on-ramp” to the tower both from a challenge and price perspective, as it costs just $10 a round. In addition, golf is a great kids and date-night activity, says Holt. The partners also built a $100,000 food and beverage facility to serve snack foods like hot dogs and nachos.

They financed the entire $4.5 million installation through a hybrid 504/7A loan from the Small Business Administration as well as the personal investments of the four partners—man – aging partners Holt and Hoffmann, and two silent partners— involved in the project.

Doing the math. By studying a number of similar installations around the country and consulting with industry experts, the RYZE partners projected that the park would attract 30,000 visitors annually while remaining open year-round, weather permitting. With tower climbers paying roughly $40 apiece, and with ancillary revenue from mini-golf and food and bev – erage tossed in, a return on investment could comfortably be expected within a fairly tidy three- to four-year range.

By early 2020, a satisfactory design had been worked out. Holt and Hoffmann, guided by Da Costa, were ready to build. Everything was lined up and ready to go. And then things started to go a little haywire.

The whole construction process became what Holt calls a “clowns into a car, clowns out of a car” series of complications and setbacks, brought on at least in part by the arrival of the Covid pandemic. Materials were held up in transit, construction workers from Europe were forced into remote quarantine, local utility companies were slow to respond, banks were clogged with loan backlogs. In general, things in the overall building process that Holt believed should have taken days or weeks took months.

Building materials manufactured in Spain, for example, got held up in port there because the shipping containers needed to transport them to the United States were nowhere to be found. The materials were also put on what Holt calls “agricultural hold,” for reasons that to Holt remain mysterious. It was as if the building materials were “in no-man’s land,” he says. “Several times, I had no idea where the shipment was.”

Da Costa, whose Germany-based company has global reach, has a less downbeat recollection of the shipping hold-ups, which he presumably believed were par for the course when doing intercontinental business during a pandemic. “Actually, things went pretty well given the situation that was happening worldwide,” he says.

A $100,000 food and beverage facility with a snack stand and outdoor seating near the adventure course is proving to be a significant revenue driver for RYZE, especially when school groups are on site.

Quarantines and utilities. When, per Da Costa’s recommendation, Holt and Hoffmann chose to go with a 10-man team of specialty construction workers from Europe rather than with local contractors—under the premise that knowledgeable workers could reduce the construction time by half, and hence the cost—the pandemic tossed out another stumbling block. Some members of the construction team had been in countries from which direct U.S. entry was not permitted due to Covid restrictions. As a result, they had to remain in quarantine for a couple of weeks in Costa Rica, from which they would then be allowed to enter the U.S. post-quarantine. (It could have been one of several countries, but Costa Rica was chosen, says Da Costa, “because we like to surf.”)

The Costa Rican layover resulted in an extra expenditure of $30,000. (On the plus side, local construction unions, aware of outside specialists being hired to do the work, did not put up a stink. And some local construction workers—a crane operator and a welder, for example—did pitch in.)

Utility hook-ups became a major headache. “The biggest issue was getting water,” says Holt. “It took four months. At one point, six different companies were trying to put in a fire hydrant.” Electric installations were similarly delayed. Delivery of a lighting package—“just bulbs and ordinary fixtures,” says Holt—was held up for three months, a delay suppliers blamed on back-order congestion and other obstacles.

The financial piece of the puzzle hit a Covid headwind when “banks ground to a halt,” says Holt, as they became entangled in Covid-related lending complications. “People [at the bank]were busy doing things they had never done before,” says Holt.

Construction delays, of course, are nothing new, and, as Da Costa suggested in reference to the trans-Atlantic shipping, hold-ups were to be expected. Nevertheless, falling months behind schedule was a cause of frustration for Holt and Hoffmann.

Finally, Holt and Hoffmann were able to open the park in mid-September 2021. The initial response from park guests, says Holt, “was really good”—a response that Holt believes was far from certain in a community (greater St. Louis) not necessarily known for an adventurous streak in its recreational choices. “It is not an active market,” says Holt.

Aside from the climbing structure, mini golf has performed as expected. And after the park’s first month, the food and beverage facility proved to be a significant revenue generator. School groups are expected to be a major RYZE constituency, and “schools absolutely burn through the concessions,” says Holt, sometimes spending hundreds of dollars in an hour.

It is too early in the life of RYZE for expansion plans, but there is space available, says Holt, should they decide to add on to the existing tower, build another structure, or introduce a new activity. However, after their first, chaotic passage through the construction gauntlet, Holt and Hoffmann are presumably not rushing to upgrade any time soon.