For the latest crop of businesses profiled in our monthly Park 360, making a dollar isn’t enough. Each has also made it a priority to give back to its community, focus on underserved groups, and take care of the environment. It was just a coincidence that the three owners and operators are all as civic-minded as they are passionate about their industry, but we know they aren’t alone. Here are some common threads from their stories. 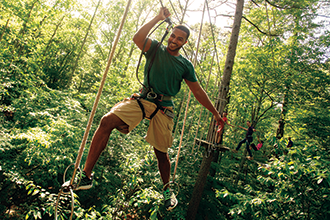 Crossing the stirrups at Go Ape Blue Jay Point in Raleigh, N.C., one of a dozen Go Ape parks that give back to the community in a variety of ways.

Commit to Community: Parks are giving back to their communities in a variety of ways—in some cases, their business is structured around it. Maryland-based Go Ape operates 12 U.S. adventure courses, and counting. The company employs a unique business plan: Each course is built in an existing city, county, or municipal public park. Giving back is the goal, and each Go Ape “park partner” receives a percentage of money from ticket sales to reinvest in their grounds or community. It’s a win-win for all involved, and ties into the idea that outdoor recreation should be available to everyone—a basic tenet behind public parks in general, and one that Go Ape advocates, says co-owner Dan D’Agostino. The company also makes it a priority to target non-profit and charitable groups like the Wounded Warrior Project and Big Brothers Big Sisters, donating more than $30,000
in cash plus thousands of free tickets each year.

Educate: Education is a main focus at Massachusetts-based Ramblewild, an aerial park that operates under the non-profit arm of Feronia Forests. Ramblewild’s Luke Bloom says kids from local schools are brought to the park via a scholarship program aimed at those who couldn’t afford to come on their own. Once there, the fun of the aerial park is used to grab their attention so they can learn about bigger-picture things, like nature and environmental sustainability. “Once we have the hook in, it’s easier to talk about the trees and other things,” says Bloom. Social impact is the goal, and Ramblewild hopes its efforts will help kids learn to be stewards of the land. “Part of that means educating youth about how to reasonably take care of these forests. If it doesn’t start with education, these forests will be gone,” says Bloom. And Ramblewild doesn’t just focus on kids—three different educational tracks, focusing on sustainable energy and nature, are available to all ages.

Bradd Morse and members of the management team of Jamaica Zipline Adventure Tours; the park is the biggest local employer and key to the area’s economic development.

Economic Development: The economic development component is what drives Bradd Morse, a consultant who owns parks in Jamaica and New York. His first park, Jamaica Zipline Adventure Tours, half an hour from Montego Bay, is the primary employer of its local, rural community. Morse quickly realized that this is a great responsibility, one which he didn’t anticipate. “I went there to build a business and make money,” he says. “In the end, I realized the effect it had on a small community. You employ everyone, and it’s a really big responsibility—making sure the business is successful so the community will succeed.” Morse says the realization helped make him a better businessman, and took this focus to New York, where he applied for, and received, a $400,000 grant from the state’s Economic Development Committee. The money had to be used for labor, and helped Morse open New York Zipline Adventure Tours in the Catskill Mountains in 2009. “We got a grant to build a course there because it was a depressed area,” says Morse. “It worked exactly the way it was supposed to—created jobs and brought revenue to the area.” The company is now the second largest employer in the region. “People just don’t think about the impact they can have,” he says.

Make Stuff: In addition to Ramblewild, Feronia Forests also produces and sells maple syrup and maple water sourced from its 1,700-acre forest. Eight thousand taps are utilized each spring to collect sap for its Mission Maple Syrup, which is processed by a local farm, then sold at the Forests. Its Vertical Maple Water is gathered from the same trees. Each of these endeavors funds and fuels the others, says Bloom. For example, for every bottle of maple syrup sold, $2 go to the Feronia Forward Fund, which provides scholarships to schools (see: Educate). “One can’t function without the other,” says Bloom.

Environmental Stewardship: Ramblewild and Feronia Forests operate under a “Sustainable Full Forestry” mission, which dictates that it “put trees to work” for profit without ever cutting one down. The property also houses six wind turbines that provide power to 8,000 Berkshire County homes, in addition to running its education programs teaching stewardship to kids and adults.

At Go Ape, trails are built with woodchips to reduce compaction of root systems, and the company chooses not to drill platforms into trees. Go Ape also runs an extensive stewardship program in which staff and volunteers participate in park cleanups, “Weed Warrior” programs, and more. And Jamaica Zipline Adventures offers a Taste of Jamaica eco-tour, in which visitors can sample fresh coconut water, sugarcane, and pineapple that’s grown on the property.

Parks are respecting the environment from which they profit in a variety of ways, and it’s become a mutually beneficial relationship between man and forest.