Flying on a zip line through lush treetops high above the wild terrain beneath you certainly spikes an adrenaline rush. Add a massive herd of exotic creatures and the excitement kicks up a notch. Now, it’s like you’ve been dropped into the Maasai Mara National Reserve in Kenya or a scene from Jurassic Park—except the zip line you’re riding is in southeast Ohio. 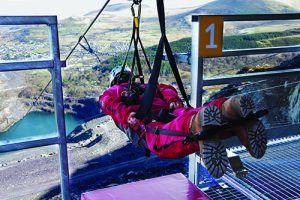 Zip World in Wales claims the zip line at Penryhn Quarry is the fastest in the world.

The Wilds, 80 miles east of Columbus, is a 10,000-acre conservation center on reclaimed coal-mine land. It’s a rare juxtaposition, and precedent for turning old mining sites into healthy, vibrant resources.

“We want to be on the front lines of conservation science and help to protect endangered species, which we do through an innovative expertise in large pastures and big-animal herds that thrive in those spaces,” says The Wilds vice president Dr. Jan Ramer. The nonprofit specializes in the caretaking and research of big-animal herds, and also offers educational programs and unique outdoor experiences for guests, from fishing and horseback riding to zip line safari tours.

The Wilds exemplifies a best-case scenario of reclamation alongside a few other zip line adventure parks also based on reclaimed land. These can provide extraordinary adventures. However, most—like The Wilds—had to carefully manage their environmental restoration. There are a number of abandoned sites scattered across the U.S. but nearly all come with complex hurdles.

The Hard Reality of Reclamation

The biggest challenge is that cleaning up former mine sites typically requires a ton of work, time, and money, says Chris Holmes, public affairs specialist for the Office of Surface Mining Reclamation and Enforcement (OSMRE). This agency, housed within the United States Department of the Interior, works to ensure that citizens and the environment are protected during coal mining and that the land is restored to beneficial use when mining is finished. That work includes assisting The Wilds as it still navigates acid mine drainage on its property.

An estimated 500,000 abandoned mines exist across the nation, according to the Bureau of Land Management. In general, reclamation costs are high. “We’ve handed out billions of dollars in the past 40 years—and there’s $10 billion of work that needs to be done—for coal mining reclamation. The cost of today’s clean-ups falls on the coal mining companies, as required under the law,” explains Holmes.

That law is the 1977 Surface Mining Control and Reclamation Act (SMCRA). It requires coal mine operations launched from 1977 on to adequately reclaim land during and following the mining process. OSMRE also supports reclamation and cleanup of pre-1977 mines, which are typically smaller but far more numerous.

Less complete reclamation work done prior to SMCRA has led to a range of diverse reclamation challenges today, says Sara Eckert, another public affairs specialist for OSMRE. On the positive side, “We see a lot of really incredible things happening when it comes to reclamation benefits. A lot of abandoned mine lands are reclaimed and provide tremendous benefits to the community, including areas for hiking paths, motor sports, cross country and running trails, and water access for fishing and canoeing,” she says. 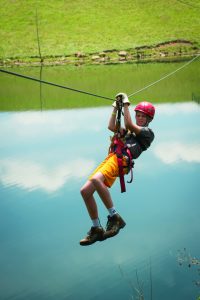 Ten zip lines and a rappel are built in and around The Wilds’ animal pastures, which are occupied by exotic species such as giraffes and herds of Sichuan takins. The tour is an incredibly rare “flight seeing” experience.

The attraction, which opened in 2011, was designed by Zip Line Creations LLC, which also owns and operates Hocking Hills Canopy Tours near Rockbridge, Ohio. The zip lines range from 200 to 800 feet long and carry riders an average of 50 feet above the ground. The tour ends with a 26-foot rappel. Most of the platforms are free-standing structures, with composite decking and tin roofs attached to utility poles. One platform is built in a tree. 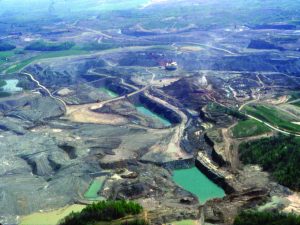 Each guide is trained to the ANSI/ACCT standard in addition to unique local operating procedures. For example, lowering a participant to the ground mid-line requires the presence of animal management personnel. Some of the zip lines traverse large lakes, where an unexpected mid-zip evacuation requires a boat.

The Central Ohio Coal Company donated this acreage to the non-profit in 1984. The property had been surface mined for coal for four decades. This left the environment with highly acidic mine drainage with concentrations of heavy metals, the result of a chemical reaction that occurs when surface water, such as a pond, mixes with sulfur-bearing rocks.

Over the decades, The Wilds has completed several progressive phases of reclamation, including contouring, topsoil, and erosion control plantings. A few remnants of the coal mining operations still exist, including high walls left over from mining blasts and digs, and the acid mine drainage on the northern end of the property. 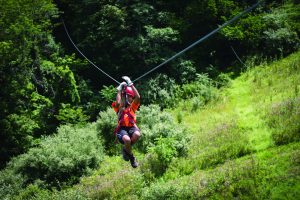 “The lake has a pH of orange juice. It’s not normal but not horribly acidic,” says Ramer. “The water runs from this lake through a series of about six beaver dams down to a creek. By the time it reaches the creek, the beaver dams have done an appropriate filtration process.” Scientific research, which has tracked the progress in cleaning the land and water, has been one of the benefits of operating on reclaimed mining land.

Ramer adds, “There’s no one solution with fixing acid run-off. Properly altering high walls requires good engineering, and equipment is used to fill in the landscape or diminish parts of the wall. Our director of restoration ecology works hard with local and federal agencies to address those situations, and we’ve received grants from those governments to help.”

The first species released to the pastures, in 1992, was the Przewalski’s horse, a critically endangered animal native to Mongolia. The herd thrived and later was reintroduced in Russia, bringing its recovery full circle. “Our goal is to have assurance herds,” says Ramer. To ensure genetic diversity among endangered species, she notes, The Wilds and other accredited institutions breed and trade various species rather than pull animals from the wild.

Nurturing trees is difficult on reclaimed mine land, due to soil compaction and low nutrients. To create wildlife habitat, The Wilds has restored and established 700 acres of prairies, 20 acres of wetlands, 100 acres of riparian buffer, and 20,000 linear feet of stream. Researchers are studying several tree establishment techniques with a goal to resurrect forests on reclaimed grassland sites. More than 10,000 tree seedlings have been planted since 2014 for this purpose.

The Wilds has been a costly endeavor, says Ramer, but the positive economic impact has been tremendous for the neighboring communities. The Wilds contributes nearly $15 million to the regional economy through promotion of wildlife conservation, entertainment for travelers, and direct and indirect job support, according to a study by Ohio University. 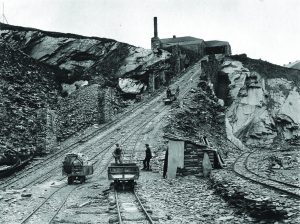 Llechwedd is the historic mining site where the current Slate Caverns by Zip World exists.

Across the Atlantic in the United Kingdom, Zip World recently built a legacy of aerial adventures on old mining grounds throughout North Wales. In 2013, its inaugural location launched at Penrhyn Quarry, near Bethesda, a 400-acre site that was at one time the world’s largest slate quarry. Now, it houses what is billed as the fastest zip line in the world and one of the longest in Europe, the Velocity 2.

Riders can reach speeds of more than 100 mph—up to a record 119 miles per hour—on the longest of two zips that flies 1,640 feet above a turquoise-toned quarry lake. The braking system is a Powerfan with Zip World’s own braking trolley designed in conjunction with ISC. Including the second, shorter zip, it’s a two-hour experience with a total zip-line length of 5,102 feet.

It’s a powerful attraction, too: Nearly 100,000 participants are drawn to ride the Velocity 2 each year.

Sean Taylor, founder and CEO of Zip World, was naturally drawn to the location. His mother lived a handful of miles away from Penrhyn, so he grew up familiar with the site.

“We’re really lucky. Penrhyn is the finest example of using the topographical land of a post-industrial landscape,” says Taylor. “We can’t drill. Our foundations are made of concrete mass on slate tips. We have environmental values and are a stakeholder in the special qualities of Snowdonia National Park, which we border.”

The facilities include free parking, a restaurant and cafe, a viewing platform, another viewing area with picnic benches, pet care (seasonal), a meetings and events venue, a gift shop, and lockers. The visitor center, called The Adventure Terminal, is a modern building that allows participants to hang out (social distancing permitting) and enjoy a great view of folks zipping down the Velocity 2.

By 2014, Zip World expanded to another site, Slate Caverns. The Caverns sits on a former slate mining site near the town of Blaenau Ffestiniog and offers both underground and above-ground zip lines. The underground cavern is enormous. “You can fit St. Paul’s Cathedral in it,” says Taylor. 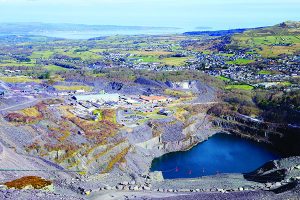 Above ground is the Titan, with four side-by-side zips.

Above ground is Titan, a tour with three separate spans, each with four parallel zips. The two-hour excursion covers a cumulative distance of 6,200 feet. Zip World Caverns is a three-hour underground adventure with 13 zip lines, as well as a via ferrata, rope bridges, and more. A Zip World team of instructors leads each trip and delivers a training session before guests enter the course.

The cavern presented some unique challenges. “It was a higher cost to develop, because there was a lot more manpower and it took a lot longer [than our other locations]. We needed to do a lot of geological surveys. We had to install a net [below the ceiling]in case of collapse. Everything was done by hand, with gun powder, like our predecessors.”

For each location, Zip World secures a long-term lease, builds at its own cost, and pays the landowner a percent of the turnover. “Private equity has a safety and restoration liability with owning mines. It’s a lot easier to lease,” explains Taylor.

That said, “It’s easier to get the planning done” for constructing an adventure in a mine as opposed to starting from scratch, Taylor says, since it’s already a developed site. And it leaves the surrounding environment untouched, which appeals to him.

Zip World has, even more than The Wilds, benefited its local economy. In 2018, North Wales Tourism conducted an economic impact study of Zip World, including the two adventure sites built on reclaimed mining land and a third woodland location. The total annual visitation across all three locations is close to 500,000. Over a five-year period, the company brought $325 million into the surrounding North Wales economy.

“Our towns and villages are quite deprived post-agricultural and industrial communities,” says Taylor. “We employ 450 staff at the busiest time. We have a headquarters in Llanrwst. Our supply chain—fences, equipment, harnesses, and trolleys—consists mostly of goods that are all made locally. It’s fairly rewarding to be in a position to do that.”

Clearly, reclaiming an abandoned or old mine site for recreation or an adventure park isn’t a low-cost or fast process, in most cases. However, investments like these benefit the environmental, cultural, and economic stability of communities that once thrived when the mines were operating.

As The Wilds’ Ramer says, “It takes a champion for a reclamation and conservation effort like this to happen. Other former mines need a champion with the right influence and background to push forward the effort.”