When it comes to participating in any sport or recreational activity, the number-one priority is to protect the old noodle. Most skiers, cyclists, motorcyclists, climbers, et. al., typically wear helmets, as, of course, do athletes in a variety of team sports. One good knock on the noggin can have lifelong consequences. No reason to risk that.

You might think, then, that requiring helmets at adventure parks, with participants often suspended many feet above the ground, would be (pun intended) a no-brainer. It would seem an important part of the primary mandate in operating a park: mitigate risk. But as a 2015 roundtable discussion demonstrated (“Changing Times,” Adventure Park Insider Winter 2015), not all park operators agree that requiring helmets is a sensible safety measure. That hasn’t changed—the great helmet debate rages on.

The risk of a serious head injury at an adventure park is almost incalculably small. Insurance executives and park operators are hard-pressed to name a single incident in which a helmet prevented, or might have prevented, a serious injury at a park in recent years. (Or where the absence of a helmet led to injury.) Nevertheless, there is agreement that a head injury is at least theoretically possible, and that the severity of head trauma could be more catastrophic than most other possible injuries. Better to be safe than sorry, say many. Strap on the old bean bucket and reduce the already small chance
of a traumatic brain injury (TBI) to next to nothing.

But some park operators and even people in the risk-averse insurance industry contend that helmet wear comes with a slew of negatives. Helmets can actually cause injury, is one of the arguments, with helmet edges or straps getting caught on things like belay lines, lanyards, and platforms. If the risk of a TBI is so miniscule, why introduce new potential risks associated with helmets? Other knocks against helmet requirements include sanitation and storage challenges, helmet wear and tear, guest discomfort (and possible overheating in warm environments), the added cost, and adding one more element to guides’ pre-activity guest prep, briefing, and equipment inspection.

Then there are the betweeners—those who believe helmets should be required under certain circumstances but are not necessary for others. Indeed, all points of the spectrum are represented.

The short answer, of course, is no one. Or everyone.

Matter of choice. Requiring participants to don helmets remains a matter of choice for park operators, based primarily on an assessment of risk. There are currently no states or local jurisdictions that mandate guest use of helmets at adventure parks, and industry insiders agree that no such mandates are anticipated any time soon. Staff working at height, of course, are required by OSHA regulations to wear helmets, and employers are required to provide them free of charge.

Industry standards. Government regulatory agencies typically take their lead from industry standard-bearers. In the challenge course and adventure park industry’s case, the ANSI/ACCT standard says, in part, “A qualified person shall determine whether a helmet is required.”

Similarly, the ASTM F2959 standard says the designer/engineer is responsible for hazard analysis, identifying any potential hazards, and mitigating them. Specifically, the designer/engineer shall, among other things, “determine what personal safety equipment (PSE) is required for each aerial adventure course based on the application.” This includes helmets.

Until those organizations begin to call for mandatory helmet use, government safety agencies are likely to hold fire. A single, well-publicized catastrophic incident could, of course, tip the balance. But unless that happens, requiring helmets remains a discretionary choice for each park operator.

In weighing the pros and cons of helmet use, perhaps the best place to start is with what ArborTrek’s Michael Smith, owner of three adventure parks, calls a “ride hazard analysis.” That’s basically a four-step process of assessing the nature of potential risks, the likelihood of injury, the potential severity of an injury, and the best steps to take to mitigate the risks. 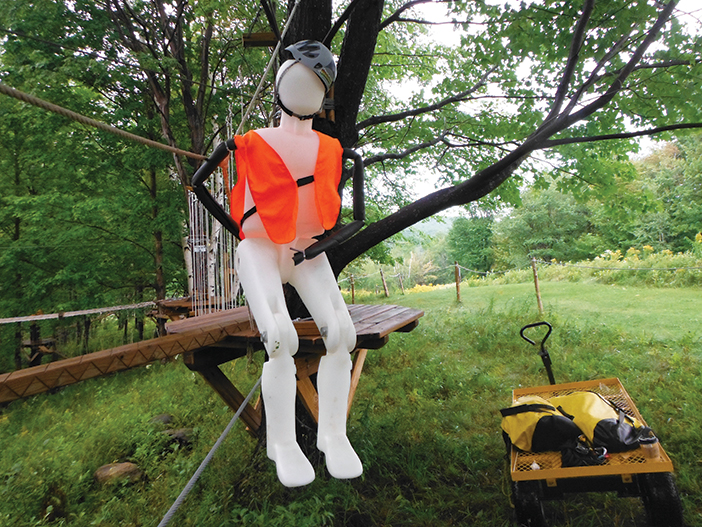 ArborTrek uses a 180 lb. dummy for risk assessment of helmet use.

Mitigate risk. Park design is paramount in protecting guests from potential head injury, says Smith. As the standards suggest, “It is totally up to the designer to determine whether a helmet is necessary or not,” he says.

Among head-safe park design considerations: keeping guest heads away from potential noggin-knockers like low-hanging branches; installing belay lines above head height; designing arrival platforms that minimize potential impacts, and so on. On the head-protecting checklist, “helmets are the last step in mitigating risk,” argues Smith.

Cameron Annas of Granite Insurance generally agrees that helmets aren’t a great head-protecting panacea. Any insurance carriers that insist “’if you don’t use helmets, we won’t insure you,’” he says, “just are not educated in this industry. You would think that helmets are always safer, right?” Annas asks. “However, that’s not the case. Ask the climbing industry. The climbing industry moved away from helmets, especially in indoor environments, because it causes an increased risk of strangulation” with helmet straps getting caught on protrusions.

Annas, too, believes that designers should aim to minimize head injury risk in course design, particularly by ensuring a course is free of overhanging tree limbs. He does, however, say that helmets should be used for zip lines, taking something of a ‘tweener position.

All-helmets-all-the-time. Robert Monaghan, of Hibbs-Hallmark, another insurance company specializing in the aerial adventure industry, is more of an all-helmets-all-the-time guy. Helmet use, he says, could be considered a part of a park’s “duty of care” to protect its guests from potential hazards and that “children deserve the highest degree of care.”

The duty-of-care consideration, says Monaghan, might come into play in a liability suit even when a head injury or helmet use might not be involved. “If 75 to 80 percent [of parks]are using helmets and you aren’t,” says Monaghan, “I assure you the plaintiff’s attorney is going to take that fact and use it against you” if you eschew helmets.

No helmets, ever. Outdoor Venture Group CEO Bahman Azarm, whose company owns six parks, advocated against helmet use in the 2015 roundtable discussion. He recently declared, ”I am even more hardened in that position.”

Among his complaints about helmets are storage and disinfection issues, concerns about straps getting caught on things, and restricted vision when wearing a helmet. He also notes that most park helmets, typically climbing helmets designed for protection from overhead impacts, provide no side or front impact protection. To assure that park guests are safe from possible overhead impacts, Azarm, rather than insisting on helmet use, has an arborist visit his parks three times a year to make sure trees are properly trimmed.

Azarm says that “in one or two lawsuits [his company faces]a year, helmet use has never come up.” He points to the numbers: Since 2009, “we have had over two million visitors [without incident], so we’ve proven that we’re doing OK without helmets.”

Outdoor Ventures limits overhead obstacles so guests can be helmet-free.

Except maybe zip lines … In the 2015 roundtable, Azarm noted that helmets “are a good idea in theory, but we have done research on accidents in adventure parks, and they would not have been prevented by the use of a helmet.” That said, no zip lines in his parks exceed 250 feet long. For much longer and steeper zips, Azarm concedes, helmets might make sense.

If there is a consensus on this issue, it might be here: Helmets are a good idea for longer, faster zip lines.

Pro-helmet. In contrast to Azarm, Ken Jacquot, owner of Challenge Towers, jumps with both feet into the pro-helmet camp. “I think it is a good idea to wear a helmet,” Jacquot said at the roundtable in 2015, and his position hasn’t changed. “Any time you take someone and put them up in the air, you need to protect them,” he says. “It’s just good risk management.”

Like Monaghan, Jacquot also thinks helmet use can be an important indication of overall risk management in a liability suit: “They [plaintiff’s lawyers] are going to sniff through your drawers to try and pin something on you—to start building a case that this is a negligent operation,” he says.

Most helmets used at parks are basically climbing helmets, possibly with slight modifications. Three major issues associated with park use that might fall outside a standard climbing design are sanitation, fitting, and protection from more than just overhead impacts. Helmet manufacturers, say some operators, have been a bit slow in addressing the specific needs and risk issues of adventure parks, although companies are moving gradually in that direction.

Fit issues. Ben Eaton of Petzl says its Panga helmet takes on at least the first two issues, with a wide adjustment range (i.e., one size fits all) and an interchangeable headband for replacement after repeated use. Similarly, Kenny Brodin of Kong says its Mouse Sport helmet has an adjustment range of 52 cm to 64 cm and the foam on its brow band is replaceable and easily cleaned with a mild detergent.

Park-specific helmets. However, both Petzl and Kong continue to utilize climbing designs for the adventure park market. Although some helmet models can be fitted with eye-protecting visors—a measure that Jacquot has taken—protection from impacts other than those from overhead is still not in the cards. The absence of a truly park-specific helmet might simply be an economic issue, says Brodin; Kong, he says, is unlikely to invest in the R&D to produce a park helmet until it is determined that such a product is viable (i.e., profitable). In the meantime, he says, “Why change something that’s working?”

The bottom line on helmet use: Start with a park design that minimizes the potential for head injury. Thereafter, assess whatever residual risk of head injury might still be in play to determine if the added protection of a helmet makes sense or if a helmet poses an added risk, as some have argued. Factor in, too, liability protection—might requiring helmets fit with Robert Monaghan’s “duty of care” considerations? In a lawsuit, the perception of risk management might be as important as the risk management itself.

As helmet use in many recreational activities has become more widespread in recent years, the public perception that helmets represent safety has grown commensurately. That might also play out in guest satisfaction and comfort level as well as in a park operator’s peace of mind. And there is something to be said for that.