The modern conception of a commercial adventure park didn’t even exist when Challenge Towers was founded by Ken Jacquot and Steve Owen in 1992.

“‘Adventure park’ was not a term in the early ‘90s,” says Jacquot. “’Ropes course’ was the phrase, and that always required an explanation to anyone not in our field. Zip lines were a treat for those who finished a successful team-building program near the end of the day.”

Now, the industry is big enough and broad enough that North Carolina-based Challenge Towers not only runs its own park, but builds and renovates them for others, sells equipment to construct and operate parks, and consults with operators large and small on how to make their existing operations more efficient or get started in the business.

The North American outdoor adventure business in the 1990s was focused primarily on corporate team-building and youth educational-enhancement experiences, which is where Challenge Towers got its start, operating ropes courses as an extension of Blue Ridge Learning Centers in Blowing Rock, N.C. North Carolina’s High Country was (and still is) a hub for outdoor education, with NCOBS located in Asheville and operating its Table Rock Base Camp in Morgantown.

“All of our efforts and income came from installing traditional style ropes courses in the vein of Project Adventure and NCOBS,” Jacquot says of those early years. “The ropes course activities were all geared toward creating a progression and skill development, comfort, fun, excitement, and learning through a facilitated experience. The primary foundation was experiential learning.”

Diversifying services. Jacquot and Owen began leveraging their experience into building ropes courses for others, incorporating Challenge Towers in 1996. Blue Ridge Learning Centers is still part of the Challenge Towers family of companies, which now includes the High Gravity Adventures park in Blowing Rock and Aerial Adventure Tech, which sells a wide variety of gear for work-at-height professionals working in aerial parks, on zip lines and climbing walls, and even on wind turbines and arboreal work.

“The model used to be that you were an operator or a builder,” says Challenge Towers vice president of operations Carson Rivers. “We branched out fairly early on.”

“Ken used to see a lot of technology emerging out of Europe a decade before it would show up in the U.S., so he helped manufacturers in Europe break into the U.S. market and bring some of that technology over here,” Miller says. 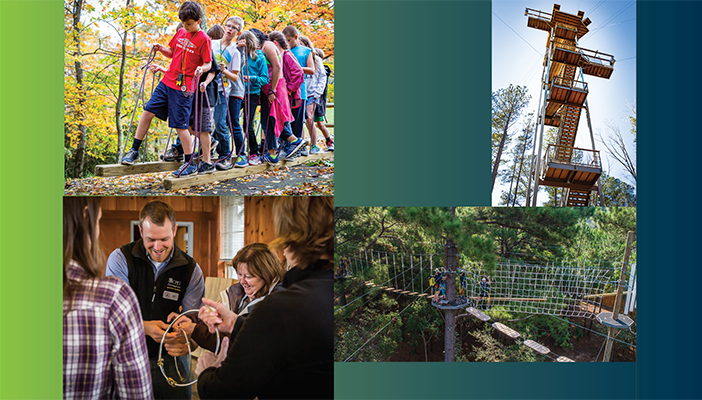 Aerial Adventure Tech has grown into the company’s most profitable business. An online store that opened in 2016 with just a handful of SKUs (stock keeping units) now has more than 3,000. “Construction is still kind of king [among the company’s divisions], but Aerial Adventure Tech has become the leader in overall revenue,” says Rivers, who notes that while new park builds can ebb and flow due to factors like the Covid-19 pandemic, gear sales “are more stable and predictable from a cash flow perspective.”

Challenge Towers’—and the industry’s—builds have evolved dramatically since the early days. “Where once we had people zipping into mattresses holding onto Goldline rope, we now have sophisticated systems that allow people to fly through the air at unheard-of speeds far into the distance,” says Jacquot. “Where we once had groups of 20 focused on one activity at a time, we now have hundreds of people moving through elaborate webs of obstacles at one time.”

The company’s construction resume is extensive. The ropes course at the U.S. National Whitewater Center in Charlotte, N.C., is one prominent example of Challenge Towers’ work; the Discovery Course and zip lines at the Utah Olympic Park in Park City is another. Other notable projects include the ropes course and zip lines at New Mexico’s Red River Ski & Summer Area, and Yellowstone Aerial Adventures, tucked into a tight downtown setting in West Yellowstone, Mont.

Most recently, Challenge Towers built the Geronimo Adventure Park near Houston (completed mid-season 2020), and is currently renovating and updating the aerial park at Cranmore Mountain in New Hampshire.

Built to last. The team acknowledges that Challenge Towers isn’t often going to be the lowest bidder on projects. “Some people may look at our work and think some of it is overbuilt,” says Miller, noting the extensive use of durable synthetic materials in platform construction in place of wood, for example. “But we’re looking at the long term; we build stuff to last.”

Rivers points to the company’s ongoing remedial work at Cranmore as an example of that philosophy in practice. “They got that course up fast and affordably, but every year they’ve been dropping around $100,000 in repairs and replacements,” he says. By contrast, repair costs at the company’s High Gravity park have only run about $10,000 annually, says Rivers.

Challenge Towers’ belief in upfront investment in durable construction squares with what Rivers sees as competition-driven consolidation in the adventure park industry. “It used to be if you build it, they will come. Now there’s a little less of a Wild West feel and more of an emphasis on quality operations,” he says.

Its own High Gravity Adventures has become the literal showplace for Challenge Towers. Designed and built by the company, the course provides a testing ground for new ideas and technologies, and also serves as a real-world marketing tool with potential clients, who are routinely invited to experience the park—preferably with kids in tow—as part of the sales process.

For example, one new concept developed at High Gravity Adventures is the SkyNet, designed to provide an adventurous play option for children under age 5, who typically are shut out of other adventure park activities. Rivers compares SkyNet to a McDonald’s play area on steroids (minus the ball pit) that doesn’t involve any exposed high points requiring harness and belay. “Operators are looking for more things that don’t involve gear,” he says.

“Being operators ourselves makes us better stewards when we’re developing other locations” as a vendor, Rivers continues. “When we’re on site, we’re expected to be the experts, and having High Gravity gives us a leg up on that.” 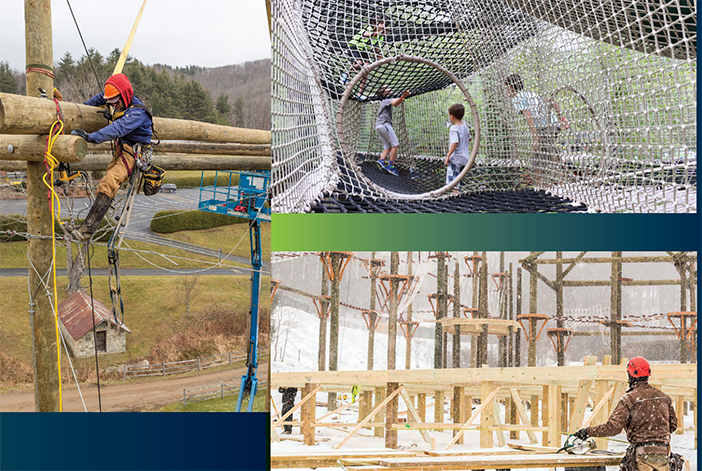 Rivers says the company has considered opening other parks under the High Gravity Adventures brand, although there are no current plans to do so. Further along in discussions is the possibility of adding new features to the Blowing Rock park, such as bike rentals to take advantage of a greenway trail now taking shape in the region. Such an expansion, says Rivers, would mirror an industry-wide trend toward more diversified in-park offerings.

The Challenge Towers team brings a broad base of expertise to the table, says Miller. “When you engage with our company, you’re getting input from a large team that’s looking at design, operations, training, etc.,” he says. “We leverage our institutional knowledge.”

Sole vendor services. Ideally, says Miller, the company engages with clients at the outset of projects, designing parks from the ground up, building the courses, training and equipping staff, and consulting on operations, from creating safety protocols and best practices to “secret shopper” reviews once the park goes online.

However, Challenge Towers can and does provide services at almost any stage of development for a wide range of clients, from its traditional base of small camps and schools to large commercial adventure parks.

Flexible collaboration. “We love [being the sole vendor], but the reality in our client base is that many people like the idea of working with multiple vendors,” says Rivers.

“We have to be more flexible and at times be more open to working with people in different ways, and not only this all-encompassing model,” Rivers says. About the only thing the company won’t do is design a course that someone else builds (too much potential liability involved, according to Miller).

Operation consultation. Consulting is a smaller but growing part of Challenge Towers’ portfolio of services. “We are trying to intentionally develop that area because of the knowledge we have of the industry,” says Rivers. Services include the kind of third-party operational “look-in” that goes hand-in-hand with the physical infrastructure inspections required for Association for Challenge Course Technology (ACCT) operation accreditation.

Consulting clients cover the range of Challenge Towers’ existing relationships, as well as incoming owners of new and existing parks. “We help owners understand what kind of remediation they need to get off the ground,” says Miller.

As the company’s services grow, Miller jokes that Jacquot’s entrepreneurial spirit has driven Challenge Towers’ expansion and diversification, but it would be OK to pump the brakes a little. “We are always planning and scheming to try to stop Ken from starting another company,” he laughs.

Challenge Towers may have diversified far beyond ropes courses in the past four decades, but Jacquot says the company’s core philosophy remains unchanged.

“It is not hard to see the future when there is a non-stop expectation for more fun, more excitement, and more thrills. So, providing activities where people [experience]low-risk and high thrills will always be on the plate,” he says. “What interests me more is to explore and keep alive the impact, value, and benefits that many of us all so loved about our world 30 years ago, and keep that growing and relevant. There is a need and a benefit to our future for more and more people to be aware, awake, and thinking.”

“We are still in the experiential world, and I will never stop caring about the power of our history and the value it brings to human development,” says Jacquot.