The jungle gym, a staple of playgrounds of the mid-20th-century, is one of the true genealogical antecedents of the 21st-century adventure park. And when the Children’s Museum of Denver at Marsico Campus opened its ambitious Adventure Forest this summer, it was, effectively, building on this playful foundation: an outdoor structure for kids to exercise (literally) their natural passion for fun.

And to learn. Education is central to the Museum’s mandate, and according to official Museum literature, a part of its rationale for building Adventure Forest was that “free play is a major agent in children’s development and learning.”

Given the twin goals of the Children’s Museum, its park provides a good example of a complete kids facility, even with its decidedly un-jungle-gym-like budget of $2.3 million.

Multi-sensory experience. One of the main objectives of the Children’s Museum is to “interact with all your senses—auditory, visual, and experiential,” says Thaddeus Shrader, CEO of Bonsai, the park designer and builder that collaborated with the Museum in the creation of Adventure Forest. Samantha Harris, the Museum’s marketing coordinator, puts it this way: “It’s a place where kids can reach new heights—literally, physically, and mentally.”

Adventure Forest includes more than 10 familiar adventure-park features reinvented in a kid-friendly format and with kid-friendly names: Chimney Climb, Spider Web, Willow Nest, Slinky Climb, Tippy, Tippy Top Lookout. Each feature is designed with a set of learning objectives in mind, such as balance, route-finding, risk assessment, spatial awareness, and proprioception (go ahead and look that one up). “Kids spend a lot of time looking at screens, so free-range adventure is more important than ever,” says Harris, echoing the words of Children’s Museum president and CEO, Mike Yonkovich. 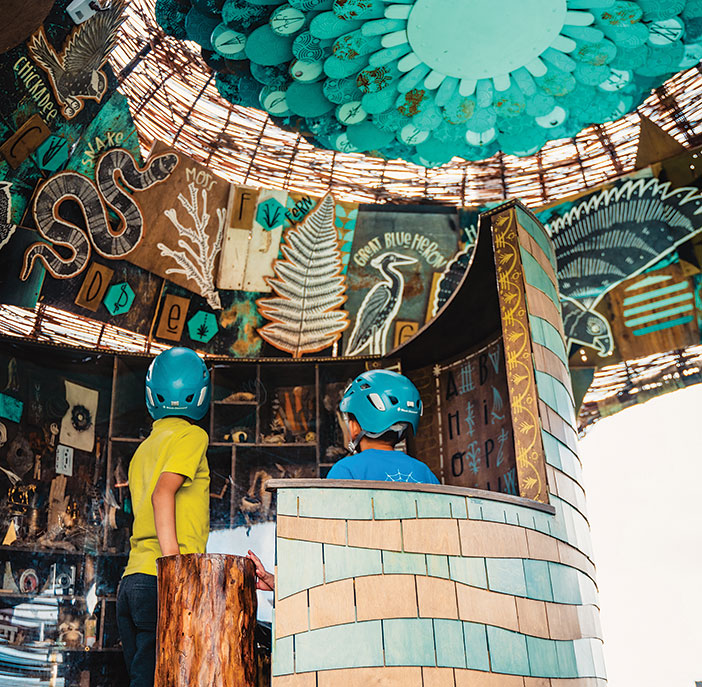 Free play and visual stimulation are two of the goals the of Adventure Forest.

The idea for Adventure Forest, hatched four years ago as part of a major Museum expansion, was to recast an adventure-park design with kids five to eight years old (or more than 44 inches in height) in mind. “We set out to blur the lines between adventure park and playground,” says Shrader. Construction began in June 2018 and was completed a year later.

Kids of all ages. The full length of an Adventure Forest tour is a relatively short, kid-manageable 500 feet. The route has a variety of challenges and employs netting and other safety features to avoid the need for harnesses and lifelines, although helmets are required. What challenges a five-year-old might bore an older kid, so in familiar adventure-park fashion, Adventure Forest presents easier and more difficult alternatives for each feature.

And while kids are the target audience, the Museum and Bonsai didn’t intend for this adventure park to be simply scaled down to a five-year-old level. Although Adventure Forest is not open to adults without children, both Shrader and Harris believe that parents accompanying children should be challenged and be able to have fun in the Forest, too.

Left: Adventure Forest is fully netted, eliminating the need for harnesses and lifelines so kids can explore freely.
Right: Each space in Adventure Forest has its own visual theme and unique elements.

Visual art. The Museum also enlisted its in-house artist Wes Sam-Bruce and its exhibit team to join the collaborative design team to provide visual stimulation for participants and thus supplement the physical experience. The artistic component, with natural themes, aims to help kids “reach their connection with nature,” according to Harris.

Outdoor experience. Why did the Museum decide to take the ambitious and relatively expensive step of crafting an outdoor adventure experience? As Shrader says, “The Museum already had tons of indoor stuff. This was a chance to build something more active and specifically outdoors.”

The Museum already had, as an outdoor installation, Joy Park, themed on the water features (rivers, canyons, etc.) of the Colorado wilderness. But Joy Park is ground-based and billed as “baby-friendly.” It does not present the kind of physical and mental challenges or perceived risks of Adventure Forest.

Museum in-house artist Wes Sam-Bruce is the man behind the visual features of the project, aimed at connecting kids to nature through art.

According to Shrader, most of the Adventure Forest features are 10 to 30 feet above the ground, though ambitious climbers in the Forest’s highest structure can reach heights exceeding 90 feet.

Passive safety. Because young kids are the main participants, the designers paid extra attention to safety issues. But because the features are intuitive, staffing is relatively minimal and straightforward. “It’s like a pool situation,” says Shrader, “with lifeguards to make sure people aren’t doing anything stupid.” Staff are not there to guide or to explain, since problem-solving is central to the learning experience.

Funding. The Museum is a not-for-profit organization, and both the purpose and financial underpinnings of Adventure Forest differ from a similar installation at a for-profit adventure park. Take the financial piece first. To raise the capital for a project like Adventure Forest, the Museum relies heavily on donors, both large and small.

Those donors act philanthropically, rather than as investors seeking a return, so, the Museum was unburdened by such standard business calculations as return on investment. As far as the Museum board is concerned, how long it takes Adventure Forest to pay for itself is far less important than how much it contributes to the overall Museum experience.

In addition, the Museum decided to include Adventure Forest among the activities covered by a single Museum-entry ticket. No pay-to-play scheme was considered.

Growing attendance. Still, the Museum figured that the added attraction of Adventure Forest would produce an increase in revenue through increased attendance. While the early numbers had yet to be calculated, Harris says that, anecdotally, there was a noticeable uptick in attendance after Adventure Forest opened. The Museum hosts more than 500,000 visitors annually, mostly Denver-area residents, but it is also a popular attraction for out-of-state tourists.

The attendance increase came about without investment in a major marketing campaign. The Museum relied heavily on getting the word out through its media connections. And because the unique structure is highly visible from Interstate 25, which passes nearby, it was, in effect, its own billboard.

Experiential education for kids. While a for-profit adventure park’s main objective might be to maximize revenue through fun-for-the-whole-family activities, the Museum, again, is guided by largely educational objectives. It lists 11 experiential goals targeted by Adventure Forest, and mental objectives, such as decision-making and creativity, are highlighted on a par with or even above physical accomplishment. The goals list is filled with words such as “engage,” “communicate,” “invent,” and “observe.” Completing a tour from start to finish is a means to an educational end more than an accomplishment in and of itself.

While, according to recent API surveys, families with young children represent a demographic growth opportunity for park operators, families are THE target audience for the Children’s Museum. Adventure Forest’s multi-million-dollar price tag is too rich for most park operators, but park operators considering a more modestly-priced installation can still learn from the museum’s experiential approach and educational objectives. As museums and zoos have amply demonstrated, parents are willing to spend on their kids’ education.

In sum, when designing and installing a park or park structure targeting kids—and perhaps adults, too—mixing a bit of learning or mental stimulation into the physical fun can’t hurt.

And when it comes to teaching, the folks at the Children’s Museum have a lot to offer. Even before ground was broken for Adventure Forest, the museum received the National Medal for Museum and Library Service. That recognition reinforces the sense that Adventure Forest could serve as a leading model for the design of a kids’ park.

Adventure Forest brings those priorities to life within an overall context of fun, the primal enticement that draws kids in the first place. Like a jungle gym, a well-designed kids’ adventure park presents a learning experience freed from a more formal, classroom-like template. As the Children’s Museum of Denver at Marsico Campus is demonstrating in Adventure Forest, kids can discover, through an adventure park, that learning can be a blast.