SUCH A THING AS TOO EXTREME?

Is there a point when fear trumps the quest for adventure?

Royal Gorge Zip Lines in Canon City, Colo., is currently one of six beta test sites for the FlightLine, and one of only two in the U.S. The park was an obvious choice, since it already had a 70-foot tower located at the end of its Extreme Course zip line.

Bruce Brown, director of zip line operations and training at Royal Gorge and Castle Rock Zip Lines, says that, until recently, participants on the Extreme Course had to take a mandatory freefall off the tower at the end of their ride. That meant a FlightLine off one side or a QUICKJump off the other.

This mandatory freefall wasn’t welcomed by all, says Brown, and in fact caused riders to stress about it in advance or avoid the Extreme Course altogether.

“I think we (were) missing people who love extreme zip lining, but are petrified about jumping off a 70-foot tower,” says Brown. “Because social media is such a big player—Trip Advisor and website videos—I think people self-screen what they’re going to do, whereas before it was a lot more spontaneous. Now they’re doing a lot more research beforehand and scaring themselves.” 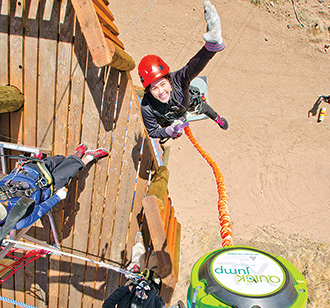 In answer, Royal Gorge took “a step back” in June by removing the QUICKJump and replacing it with multiple Head Rush TRUBLUE auto belays, which offer tension immediately, eliminating the “fall.” Since that adaptation, Brown says participation in the Extreme Course has gone up 30 percent.

The moral of the story? “Don’t make it so radical that you immediately cut out 20 to 25 percent of your market,” says Brown.

Or, just don’t make it mandatory. Instead of incorporating the product into an existing zip line, some parks are charging $10 or more for individual freefalls, a lucrative add-on that eliminates the mandatory fall and encourages repeat business.

Though freefalls have created a lot of buzz, perhaps even become a new genre, it’s hard to predict where they’re going in the long term.

“We’ll await feedback from the market,” says Salazar. “I’d love to see people go higher, but as you get higher, it gets more and more specialized. You’re going to get fewer people, and there will be a cap to what someone’s willing to pay.”

Brown thinks there’s a point of diminishing returns with higher falls. “It can be so scary that people don’t want to do them,” he says. “And if you have to build a 70-foot tower, I don’t know if you’re going to make your money back, because those things are expensive.”

“My gut tells me in the next two years we’ll probably have a good feel for how many people are willing to push limits,” adds Wells. “If freefall devices get too big and nobody wants to use them, we’ll start bringing them down in height. Are you going to build a 70-foot tower for 5 percent of the people? Time will tell. But for now, it’s darn scary and pretty fun.”